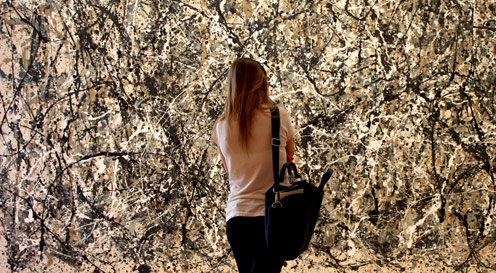 The first predominantly American art movement to really rub off on Europe was Abstract Expressionism. Its influence lead to strands of pop art, lyrical abstraction and minimalism. It began just after WW2 and coincided with a seismic shift in the art world. Simply, the most important centre for art moved from Paris to New York. In part it might explain why Abstract Expressionism soon received the title New York School [of art] but it also pointed back at something. Prior to that, the equally vague term School of Paris (École de Paris) was coined to encompass almost every movement, style and artist who lived and worked in Paris in the interwar period.

Allegedly it is not the only borrowing. If you ran a quiz at your local pub, chances are that an art historian would point out that Abstract Expressionism was coined much earlier to help explain the works of first the German Expressionists and later Wasilli Kandinsky. But the name tag did not stick to a group of artists until 1946 when the art critic Robert Coates recycled it on the American art scene.

Along with fantastic art, there was also a ready army of art critics in accolade overdrive and knack for the theatrical stunt. The adjectives rebellious, anarchic, idiosyncratic, and nihilistic have all been associated with the art movement, and for good reason. For a sustained periods of time, the artists were miserable sods looking back in anger. As individuals they frankly all had their issues, their angst and their tortured souls to deal with. Few of them were embittered, went to psychiatrists and passed derogative remarks at the entire circus of art. Willem de Kooning like many others struggled financially. It sounds like the stereotype of most artists, but as clarification he could not afford artist materials let alone feed himself. Mark Rothko committed suicide, and Jackson Pollock did not fare much better. He suffered from bouts of alcoholism and died in a drink-driving accident in 1957.

Like in CoBrA there was quite a variety of artists and individual styles. However, the common denominator was its emphasis on the spontaneous, the automatic and tapping into subconscious creation of art.

One thing that is often forgotten about the movement is how many artists it consisted of. They were an entire army to be exact, and this is just listing a few of them: Willem de Kooning, Adolph Gottlieb, Ad Reinhardt and Hedda Sterne; Richard Pousette-Dart, William Baziotes, Jackson Pollock, Clyfford Still, Robert Motherwell and Bradley Walker Tomlin, Theodoros Stamos, Jimmy Ernst, Barnett Newman, James Brooks, and Mark Rothko.

When stories are told and retold it is similar to old vinyl records. It is as if the continuous record playing grinds the groove deeper – leaving all but the most characteristic sounds, and fills everything in between with crackle and hiss. In art history it is the same, and maybe the intention with this oversimplification is to preserve our sanity.

If so, thank you.

Whatever the reason and however unfair, three artists are increasingly considered the essence of Abstract Expressionism. The three also happen to be painters, which is also characteristic for the dynamics of recent art history.

Very few people knew how the enigmatic Mark Rothko actually worked. To the untrained viewer, it looks like something you could have botched together alla prima a rainy Sunday afternoon. If you paint, however, you notice that the guy must have had an endless patience, which in turn we benefit from now. Basically, if you were to mimic his work, you would have to do somewhere between 30-100 thin layers starting with underpainting, turbentine burns and endless semi-transparent glazes. The result was pure colour retina blasts. In the middle you always find coloured zones and at the soft edges between the zones they have this peculiar glowing sensation that no other artist has quite achieved the same way.

Doomed forever to be a cliché and an involuntary caricature on himself, he is a giant of modern art. When he finally found his unique style, he famously worked on the floor rather than on the easel. His brushes rarely touched the canvas and he flung and swung the paint unto the canvas in complex layered compositions.

His style of painting won him the notoriety of being the rebel of the lot, and landed him the title of Jack the dripper. Incidentally, it is not dripping any more,though Pollock himself used the term in a radio interview in the 50s. These days the Pollock-Krasner Foundation considers dripping a swear word and refers to his work as poured because that sounds a tad less deliberate than drips, splatters or spillages. “Whatever”, you might think to these semantic nuances. More importantly, the art itself was of course everything but accidental.

Pollock painted this way because he was wild and didn’t care about his materials. No, actually he used premium grade enamel paints to obtain the best fluid viscosity for his technique. If you observe Hans Namuth’s video footage of him painting, you cannot but feel how gentle, sensitive and poetic the whole act of painting was.

The Dutch-American artist was a painter and a sculptor. As a painter he had a propensity to paint figurative work early in his career and with the increasing abstraction, he soon developed a fondness for complex figure ground ambiguity. I.e. background figures would overlap other figures causing them to appear in the foreground. The entire thing could then receive overlapping and dripping lines of paint that helped position what ought to be in the foreground somewhere towards the background. He was perhaps still the less purely abstract of the three artist and rarely worked on free-associative compositions. As a sculptor some of the works such as ‘seated woman’ appear to have grown organically from a centre and be poured out like molten lava stifling as rock. 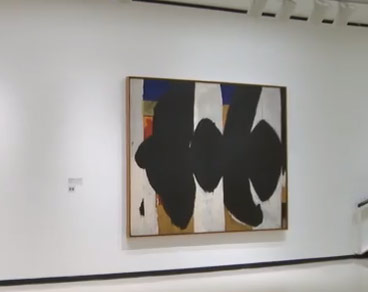 Primer on the movement by Clyfford Still Museum