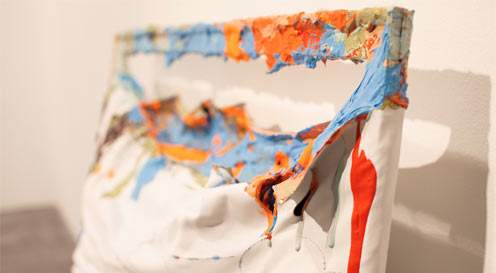 It happens right at the surface

In Europe some of the fresh influences, we so desperately need, happen to come from the Americas. Analia Saban is a point in case, and a busy list of international solo- and group exhibitions is a testament to the fact. Not to mention good gallery representations.

Her work is quite moving even if it is difficult to explain why exactly. Then you scan your memory for ‘all things moving’ to make sense. Lots of things make the impact, and you realise that they are repeated instances of the same thing. A genuine smile or hearing children’s laughter, say. In fact, it is as if these things plough deeper grooves that amplify their own effect over time.

Saban’s work, though, cuts the mustard immediately. Yet you have not seen anything quite like it before. Whilst at UCLA, the Argentinian studied under professor Baldesari, and he encouraged her to challenge conventions. And so she has in her very own way ever since.

Messing up the book of rules and expectations

Convention 1 is what exactly you are supposed to do with a canvas whilst faffing about with it anyway.

Convention 2 is the inherent sacrilege of deconstructing picture art. E.g. the act of writing commentary on top, saying which direction to stroke the brush.‘Every Brushstroke has a Name’ has what would appear the tongue-in cheek humour og mimicking the following artists signature strokes quite effectively: Kandinsky, Klee, Matisse, Miró, Picasso, and Twombly. So does composition with Ready-Made Brushstrokes by Cezanne, Chagall, Jawlensky, Kandinsky, de Kooning, Lichtenstein, Matisse, Miró, Picasso, Pollock, Twombly, and Van Gogh.

Convention 3 ought to be artistic suicide to break. I.e. the one dictating that you must continue to do the same thing over and over again until enough people get the point, and consider you an artist. Saban never stands still. Her visual vocabulary expands over time and so does her repertoire of techniques. E.g. recently, it has been augmented by the use of laser cutting.

Convention 4: being obvious about your influences. On Analia’s own website is a list of her influences. There are many she pays her respect to. Not least Jeffrey Vallance’s humorous stunt ‘In memory of Blinky’. For the uninitiated it is the full-flavour funeral service of a supermarket chicken, and the act recording it for posterity.

The magic of paint

A canvas is not just a surface; it is also a container for paint, and perhaps only a partial one at that. It is the surface of the paint which is the magic. E.g. what is sometimes worth seeing is what happens when you just peel off the paint itself. In fact that is exactly what she did in 2009 when she did the series CMYK, in which she created strips of paint in the printing process colours unto plastic. Then stripped them off, and mounted the brightly coloured paint to canvases.

Analia Saban creates art exploiting what’s possible when going from the liquid to the solid state of paint. Some work even stays encapsulated without drying.

The result often appears 3d and tactile, because the otherwise flat canvas and stretcher frame has been dropped unceremoniously into a bin liner. Then the art has become the shape she intended by arranging the surrounding plastic bag.Then it is followed by pouring wet paint in to dry. She has even added photography to the mix with success, and worked with various types of paint where the drying could be accelerated or retarded. She has also worked with encaustic paint.

Decant White #1, and Diamond Decant (Black and White Pigments) with Three Brushstrokes are poetic examples of this exploration.

Is the distinction between painting and sculpture important?

Although doing something completely different, she has been considered a kindred spirit to Jasper John and Robert Rauschenberg for being one of very few blurring the distinction between painting and sculpture. One of her pieces is a paint ball. A ball consisting of stripped paint entirely.

That she has an unconventional take on canvas and paper art, is perhaps no surprise given that she trained as a video and conceptual artist originally. Before moving to the US, she spent her teenage years in Buenos Aires working for a filmmaker who made documentaries about artists. Indeed her MFA from UCLA in 2005 had a strong emphasis on video and installation. It just does not seem a hindrance whatsoever. With Saban it is rather the opposite it would appear. It might have a lot to do with us creating art twice. Once in our heads and then by deed. If we look away from the fact that accidents in the production might play a welcome part, it is hard to ignore that most of the work takes place in the head.

You can read more about Analia Saban on her own website 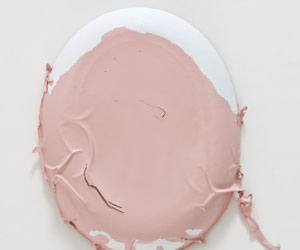 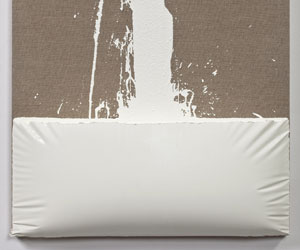 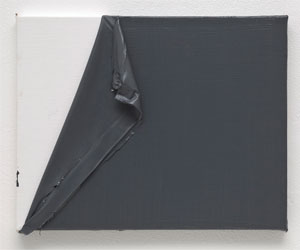