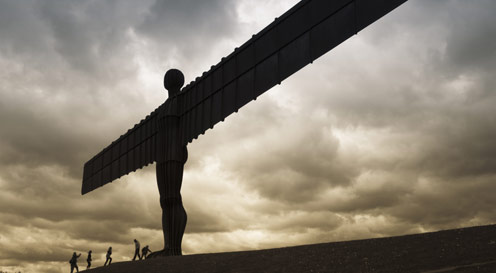 Gateshead is home to a sculpture of monumental proportions right next to the A1. It is called the Angel of the North and is the vision of the artist Antony Gormley. The angel is a conversation piece in the sense that everyone feels compelled to reflect and remark on it. The local population has proudly adopted it as something that sums up the identity of Northern England. It took a while to win everyone’s heart and mind. Not unexpectedly, the entire project aroused controversy in British tabloids from the outset, and culminated in a “Gateshead stop the statue” campaign. But today the consensus thinks it is great — except for the witty few who insist on calling it the Gateshead flasher.

Angel literally means messenger and while the artist is happy for all of us to extract our own message from the structure, Gormley respectfully considered the legacy of the region. The Angel of the North is a monument standing right on top of a hill south of an old colliery signifying a new age. An age in which men are no longer under ground but are facing another reality above the ground. He was alluding to the fact that the region had undergone a painful but successful transition from the abruptly ending coal industry to a service-driven economy. It makes the aegis of this not so-soft-looking angel a poignant statement indeed.

The sculpture is towering over the local area, and is democratically visible to every passers-by on the main artery of A1 along with A167 into Tyneside, and the East Coast Main Line rail route.

The sculpture is 20 metres tall and has a wingspan of 54 metres across. These are not the soft-touchy poultry-feathered wings you see on other depictions of angels. No, that would also be completely out of place in this context. Instead they are angular. What is more, the wings are not perpendicular to the body of the figure but angled 3.5 degrees forward. It is arguably subtle, but just enough for us to notice the artist’s intention of giving it a sense of motion towards an embrace.

It is a contemporary steel sculpture erected and finally completed on 16 February 1998. The work, however, began in 1994 and costed £1 million with funds granted by the National Lottery. For something like this to work in such a windy and exposed position, much work was involved in calculating on structural integrity. As a result the monument is built to withstand winds of over 100 mph. Considering that the wings act collectively as one big sail, it is no mean feat. Thus the foundations of the sculpture contains 600 tonnes of concrete as anchored firmly to a rock found 21 metres below the hill.

It is not just a contribution to British art, but one of the most popular contemporary sculptures on planet Earth. The 200 tonnes of weather resistant steel structure is without a doubt the most viewed piece of art in the world. It is seen by more than one person every second, which equates to 90,000 every day or 33 million every year. 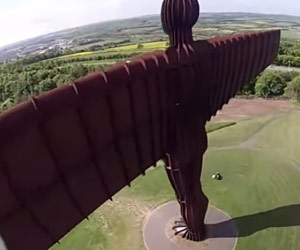 Aerial views taken from a Quadcopter 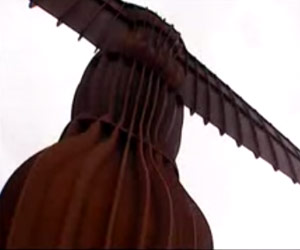 An interview with the Gormley published by theEYE 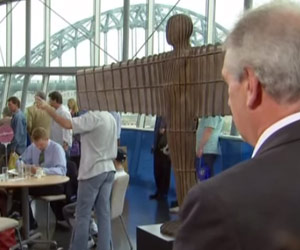 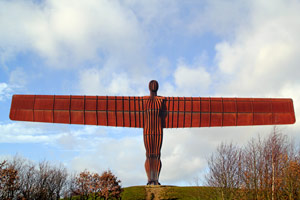