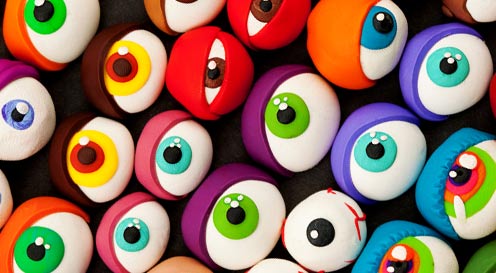 Raw art, like raw food, is not such a daft idea

Art education is not complete without addressing Art Brut. The two words became a French label coined by artist Jean Dubuffet. In 1948, He formed Compagnie de l’Art Brut with Andre Breton and others and embarked on collecting art. Today, the collection resides in Lausanne in Switzerland housed in Musée de l’art brut

The collection comprises of the works of Josef Hofer and others. A typical example of the inventory, is the works of Aloïse (1886-1964). Aloïse, spent her youth in Prussia and fell madly in love with the emperor from a distance. Commited by her family, she eventually ended up in the Asylum Gimel-sur-Morges in Switzerland. There she began to write and draw in order to outlive her fantasy world in great detail and secrecy. The drive to express herself was relentless. If she had no access to ink or pencils, she would continue with things like leaves and toothpaste. Even wrapping paper was stitched together, and the backing board from calendars were being used as substitutes for paper.

Art brut and outside art

Dubuffet explained his motivations on Art Brut more than once and in different ways, which is not the ideal recipy for clarity. But in summary, he wanted the umbrella term to denote art which has come to existence outside the main stream, outside the established art world; and outside the boundaries of the prevailing culture.

Directly translated into English it means ‘raw’ or ‘rough’ art. Often the compound words ‘art brut’ are being used in the context of art which is created by:
a) self-taught people living in obscurity
b) people expressing themselves within elaborate fantasy worlds, and vocabulary of unique symbols, and unconventional approaches to art
c) and people whose brilliant creative output is only discovered or fully recognised after their death.

Although this is not the only authorised format of an Art Brut representative, there are several artists who do match all three characteristics comfortably. For instance, the Cuban-born cigar factory worker Felipe Jesus Consalvos. Consalvos led a very anonymous life indeed. In 1983, his work was discovered in a garage sale in Philadelphia 20 years after his death. His production counted more than 800 collages made from appropriating cigar labels, photographs and found objects as orchestrated into politically charged compositions and ambiguous narratives.

Outside art and indie bands

In recent times art brut has more or less become synonymous with the word ‘outside art’ used by art critic Roger Cardinal in 1972. Some, however, might argue that his definition was somewhat broader and included folk art and naïve art. Outside art, though more inclusive, might be the one which will stay with us in the end. If you want to write an article and publish it on the web, as is the case here, you are quite quickly torn between using the appropriate term and outside art. This is because there is a perfectly good and famous indie-rock group whose members collectively chose call themselves ‘art brut’. Their fans might be somewhat disappointed to find an article on art. But so be it, the art preceded the band.

The artist Dubuffet used the often brilliant art created by mentally ill patients to exemplify what he considered art brut in its truer sense -again, and importantly, without dictating that artists would have to be admitted to hospital in order to qualify. Undoubtedly, Dubuffet was also a child of his age. He knew of Dadaism, non-art, chance and surrealism as more acceptable entities. The field of Psychology, and the introduction of Psychoanalysis could also have fueled an increased and deserved interest in art of patients.

In 1921 Dr. Morgenthaler published a book A Psychiatric Patient as Artist (Ein Geisteskranker als Künstler). The work was a thorough account of psychotic patient Adolf Wölfli, who in turn never stopped outering his imaginary world and illlustrated more than 25,000 detailed pages. Countless people have hypothesised over whether people with mental illnesses, in particular people inconvenienced by scitzophrenia have less filtered access to imagination and creativity. However plausible, there is only circumstantial evidence to substantiate the claim. The jury is still out, probably will for a long time; and maybe that is a good thing too.

Artists who are in or out

Whether Institutionalised or not – many who create art brut with all its apparent angst, joy and raw nerve – either are or have been on the fringes of society. The attraction is the pure and unpolished impact of this art. It is the very reason that many galleries have spent the last three decades to promote the resulting art for its merits. While the late Jean-Michel Basquiat may not fit the mold of art brut, it is however precisely those exact qualities that you find in his works that are characteristic for art brut. The manic scripples of the chemical composition of lighter fuel, next to almost tribal short-hand of the African-American.

Richard Dadd is one artist whose product might also appear to fit within the context of Brut Art, and yet he was academically educated and an established artist before mental illness got the better of him. Otherwise the match is quite good, and had someone visited him at broadmoor today, he could have been classed as an Art brut artist. But it is as if it would never count, because he was from another time period and place. This is often the paradox of art history. E.g. Joseph Mallord William Turner(1775-1851) arguably painted like an impressionist many years before the first impressionists emerged. The only true differences were (A) that he was not from France and (B)had no art critic calling him names for painting the Thames. It all goes hand in hand with the context rather than what the artist actually produces. In contrast to the impressionists, Turner was just about tolerated by the Royal Academy of Arts for the following reasons:
1) he had earned academic tenure
2) few cared what he did, and
3) John Ruskin, a respected art critic of the age, defended him vehemently – though quite the contrary with Whistler.

In recent years, this uneasy classification has disturbed enough people on both sides of the English channel. As a result, Turner’s art is increasingly regarded as a ‘romantic preface to impressionism’. Enough said about impressionism. It just goes to show that the act of exemplifying what is the essence of an art movement is a slippy path, and is better defined by locating its outer edges.

The notion of eccentric art

What is the centre then? Well, in the case of art brut you may be destined always trail the edges. And the reason is simple. Art brut artists are always found on the fringes of society. The Latin term eccentric, ex centre, means outside centre sums it up. The important question is then not really who or what is outside the centre, as much as it is: who has the right to decide where the centre is?

We certainly do not, but here are the names of few artists we consider examples of art brut: Ferdinand Cheval, Willem van Genk, Nek Chand Saini, Kiyoshi Yamashita and Madge Gill. 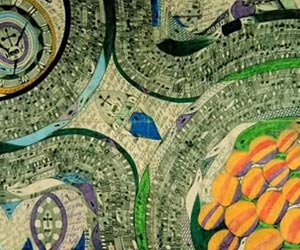