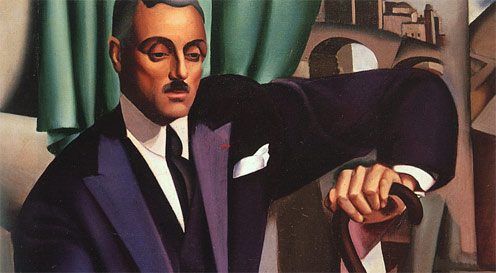 Art Deco has very much become synonymous with a particular style of crafted object having been pastiched until this day. We think perhaps of architecture, innocent-looking figurines, backelite radios, plus mass-produced posters of little typographic merit.

So it is very difficult to see how art deco paintings fits into all this. In addition art deco is considered and sometimes confused with art nouveau, because there wasn’t much time between the two styles and the difference might be tiny as viewed with todays eyes. But at the time the distinction was considerable and art deco was a reaction to art nouveau both in style and characteristics.

Why so few painters and sculptors belong to art deco comfortably

Painting in the interwar period is very hard to define simply because there were so many avant garde movements. Almost every modernist artist at the time dappled with semi-abstraction. Think here cubism, fauvism and expressionism. Some of the artists who subscribed to these avant gard isms, ocassionally incorporated traits we now consider typically art deco. E.g the angular stylised and elongated figures. But it is as if art history has been very keen on sending various artists into more respectable camps and for good reasons.

When we think Art deco paintings within this vortex of influences, we also see decorative illustrations and we see posters and adverts, more so than painters and sculptors of fine art.

But there are some artists who do fit comfortably into the pigeonhole of Art Deco painters. One is the French Jean Dupas, and the very talented Polish-born Tamara de Lempicka who is the art deco painter of women in particular and of portraits in general. Others were Raphael Delorme, Jean Gabriel Domergue, René Buthaud and Robert Eugène Poughéon. Much of the paintings were produced in the 1920s

Again we can sense something very peculiarly innocent and decorative about the art, but it is anything but. Pougheon’s picture Amazons sums up one of the major changes in society surrounding the art. The interwar women had become stronger and more liberated like true Amazonians. They drove cars, could vote, were seriously successful entrepreneurs, and drank in bars alongside men. What’s more, it had become crystal clear to most men, that the fabric of society was held together by women during and after the first world war. In art nouveau the depictions of women were blonde bathing nymphs shrouded in drapery and floral organic ornaments. It was all very beautiful, yes; but nevertheless toothless by comparison.

The war propaganda-poster and the geometric simplification of mass-produced items also influenced art at the time. It is stylised to almost the same extent as japanese woodcut prints, which in turn fascinated some impressionists decades before.

Tamara Lempicka Portrait of Prince Eristoff sums up this stylised way of composing an oil painting in the art deco spirit. 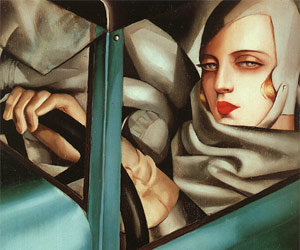 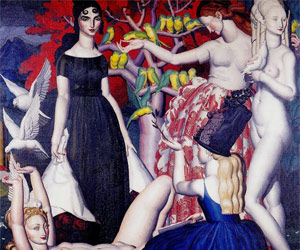 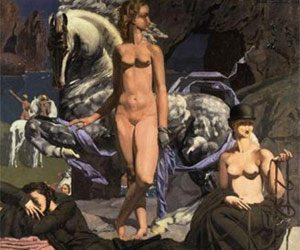