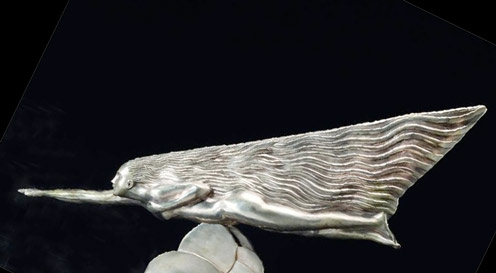 Aside from mastering the angular and round style we have all come to love or hate as art deco, sculptors understood the ice-cold reality of either having to be useful suppliers to industry or go hungry to bed. Their experimentation with materials was admirable as was the fact that some of them hitch-hiked across Europe to pursue their dream.

And now we stuff art deco into some neat boxes, ready?

Sculpture means different things to different people, and art deco sculpture is no exception. It might be easiest if we think of art deco sculpture as falling into two rough categories. One is unicas or one-off pieces produced for a certain context and often on commission. The other is series of multiple edition- or mass produced sculptures, such as bronze figurines and the likes. There is also the European and the American Art Deco to consider, and the European began somewhat earlier in capital cities of Europe with a certain overlap with art nouveau, which also makes it hard to put it into a bracket of years but it clear straddles between the two world wars, and in some places it goes as far back as 1910. There were so many other movements and trends in the period, and Art deco was pastiched long after its heyday.

From the period dominated by art deco, the vangard of fine artists were so impoverished they could not afford to have their work cast in metal or carved in stone or ivory. The exception was when they became commercial artists of applied arts, which in turn very few did. To compound the problem, modern and avant garde art was very unpopular with the public and was only the domain of a few dedicated collectors. For the few who persevered outside these two types of patronage, the everyday life was tough. As a result their sculptures were made of plaster, terra cotta, wood, papier-mâché and other inexpensive but also more perishable materials. The patronage issue was also evident in other visual arts such as painting, and art deco painters also frequently applied their arts to commercial poster making for consumer products.

By then modernist sculpture had for the greater part broken with romanticism, and incorporated more angular and semi-abstract, faceted and simplified planes. Today some of these pieces defy easy categorisation and are allied as much with e.g. cubism and late expressionism as they are with art deco. Think here Archipenko, Brancusi, Laurens and Modigliani and sculptors exhibited at Rosenberg’s Galérie de l’Effort Moderne. Other artists such as Gustav Miklos and Joseph Csaky were much more decorative and as such were more clean-cut art deco,

As for the commercial art, the choice of materials was often Bronze, ivory and marble. The ivory was very much a regional characteristic in that many 3-d art deco objects of Europe were produced in France and Belgium. Belgium had access to vast amounts of affordable ivory and black marble, because of its colonial presence in Congo.

But other than that the innovation in use of materials was vast. Artists experimented and succeeded with mixed media, electroplated bronze, sheet metal, backelite, crystals, brass, horse hair, resin, granite, and limestone to name but a few. Art deco also brought ceramics to a new level of sophistication as helped by advances in reliable industrial production.

Art deco artists realised they worked in the intersection between art, craft and industrial design

For the first time it became apparent that there was a fine, blurred, line between ‘fine’ and ‘applied’ arts. Many multiple edition items were exquisitely crafted and with great artistic flair, but they came into being using industrial methods, in which the artist was more a designer in the present sense of the word. At least s(he) was much more an idea conception person, rather than a hands-on artist and artisan.

Chryselephantine sculpture was at an all time high. The term came to encompass any sculptural combination of ivory and metal. The artists developed two distinct styles. The Berlin and the Paris school, both of which tackled rather innocent and non-offending topics as seen in retrospect. In Paris, the thematic import was fashion and theatre. In Berlin it was classical themes, but also sports and symbols of strength.

Sculptors from the period

If you want to examine art deco sculpture there are a number of artists to look up. Consider for instance the brothers Jan and Joël Martel, Edouard Marcel Sandoz or Jean Gabriel Chauvin.

A number of famous art deco sculptors came from Eastern Europe, and made their way to Berlin and Paris. Gustav Miklos, Joseph Csaky and Brancusi moved to Paris from Budapest, Hungary. Csaky, himself walked most of his way, which was a pedestrian feat of proportions. Lambert-Rucki also made his way to Paris from Poland in 1911. 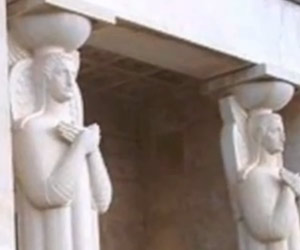 A round up of art deco