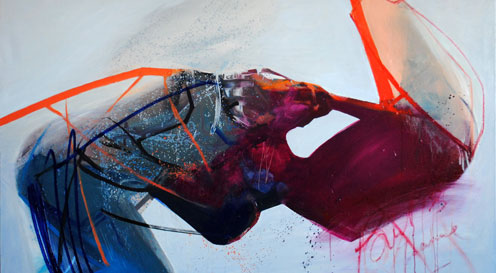 on seeing the beauty in the ugly

From a studio in Warsaw, the artist Agata Czeremuszkin-Chrut creates some stunning figurative but slightly abstract art. These manifestations have a unique signature style, and a tend to be enigmatically titled, though often within a series summed up in just one word. As an example, a recent and strong series of work has been labelled ‘beds’.

The human body is what fascinates the artist, even is is not an easy topic to address at times. You see there is a fair amount of ugliness to go along with our idealisation of the human form. The norm is to correct the abnormalities immediately. However, for the artist inherent ugliness is far more inspiring than beauty. Simply, the ambiguity lends itself well to her art. In some instances she deforms bodies to create biomorphic representations that highlight the shapes more than anything.

Czeremiuszkin-Chrut has a brutal and deliberate approach to some aspects of her work. For instance, she keeps reducing and cutting back on excess shapes until the compositions have more integrity.

The artist works mainly in oils and acrylics on canvas but has also taken to murals as a welcome means of expression.

My work is based on found photographs from the city, frames from films or clipping from newspapers. I like to have photos in very low resolution, because they are merely suggestive thus the perfect pretext to painting

Apart from that she creates multiple sketches, and collages made of recycling materials until there is something that can’t resist jumping on to a canvas. On the canvas itself she uses the contrast between the formal straight edges created with masking tape, with lines that are more the radiograph print of what she feels. Call it contrast between geometric clarity and expression if you will. Occasionally, the paint tube is also used straight on the canvas and in the the past she has not shied away from using oil bars and spray cans either.

Making a mark in public

How we represent the human condition and the mass-usage of people as objects – as merely reproduced in the media – have not escaped the attention of Czeremuszlin-Chrut. She says:

We are constantly bombarded with images which settle deeply in our unconscious minds and control our behaviour. Created by a human being, now they lead their own independent lives. We made them alive but we lost control over them

Along this she takes her own display of the beautiful and the less so to the public at large. She has collaborated with another artist on murals. What she likes about that is to engage with everyday pedestrians who is not connected with art in a big way. She works with Ania Zuber on murals and call them ‘Zetpete’. One commision has been the Bloom Hotel in Brussels.

What the future holds

Czeremuszkin-Chrut reckons her future will be more ascetic both in art and in life. She thinks she has too many things around her, and might explore a reduced palette or even sketchy monochromatic ways of externalise her thoughts and focus the viewer.

Here we get to the core of her work. It is a continuous search where the artist quite cleverly imposes a few simple rules and explores what comes out of working within. The figurative work focusing on the human body began in 2010 as a series called Minimalization. Another working title was Paper, Canvas and Wall where she worked up themes across all three painting media. In the past Write letters series included typography 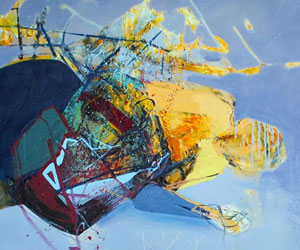 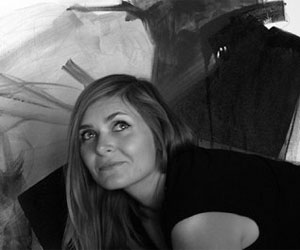