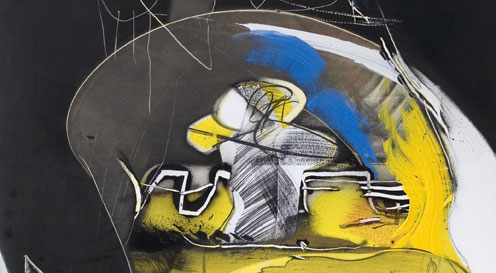 to embellish one another’s potency...

The artist’s career took off immediately after leaving the Cardiff School of Art & Design in 2008, having received a first in Fine Art.

At the year of graduating, Arthur Lanyon already appeared in the group show Saatchi’s New Sensations at the Old Truman Brewery in London. Since then, he has exhibited mostly in his own neck of the woods, but it is only a matter of time before we see him abroad.

You quickly sense the gravity of his abstractions, the control of the compositional structure, the contrast between soft and hard contours; and an uncanny knack of applying colours.

Erh you know that trite post-war argument about nature versus nurture? Well, it seems so utterly ridiculous when both are so evident in one person.

It pretty much sums up the artist. First we stumble upon his art. Then later we realise that he is grandson of artist Peter Lanyon, and son of Matthew Lanyon. Arthur is not overly philosophical about his genetic make up himself. Indeed, what purpose does it serve other than add pressure, and a sense of borrowed feathers. However, he is, as you will soon discover, philosophical about his own production.

We checked in for a brief chat with the Cornish export himself:

xamou art: When we first noticed your work, we had you down as someone older. While your art looks bang up-to-date, it looks as if you’ve been active since the mid-sixties and seventies. With that, you might even think you see traces of abstract painting done in those years. I.e then you would have to shout down the limited but bold palette of pop art. Is that only us who think so, and if not, what is your own explanation?

Lanyon: The thing you’re picking up on is perhaps the ‘painterliness’, which for me serves to function less as expression or stylistic gesture but more as a natural state for potential transition and discovery. I can see your link for the juncture of Ab Ex adapting to the influence of pop art, but as far as colour goes I use it as a compositional device and as part of my own graphic aesthetic.

xamou art: Art can be a long tough haul for many, but can also be immensely enjoyable. Where do you personally want your art to take you in 10-20 years time?

Lanyon: My enquiry seems to grapple with the question; ‘How do you paint figuratively but subvert a traditional representation?’

To explore this I have tried to distance the work in thinking about opposites; which by their very nature attract and embellish one another’s potency formally, ultimately leading to a better understanding of itself.

Within painting the opposing spectrum is subject to the same material language and the challenge is to try and make them speak. So in effect my working process is back to front in that it engages the freedoms of abstraction, but edges towards the figurative as a way to catch form by surprise. This in between state is supplement to an ongoing push and pull where the urge to utilise these modes of painting are activated by one another’s absence.

There’s something in a realistic image I want but without the ‘boredom of conveyance’. So as a reaction to my impatience with illustration, the process is driven towards intuition and an idea of the subconscious as forgotten knowledge, an intelligence irrespective of conscious awareness but channeled immeasurably within the imagination. Direct painting seems to be the way to unload this knowledge most effectively.
And therefore these paintings are products of creative experience, an attempt to instigate a subject through extracting and building visual interest with the processes of painting.

“I am seeking subject matter not abstraction”

xamou art: Your work appears to be titled. Does it represent some experiences, feelings or narrative structures that relate to the titles?

Lanyon: The titles are often subjective, part of a formal curiosity, sometimes self referential, or in reference to a feeling for the ‘Potential image’ in some figurative aspect of the work. Take the title ‘Mining for Lemons’ for example, which stemmed from the above mentioned but also as a contradiction in the fact that the act would be a fruitless endeavor.

You can find more information about the artist at his website 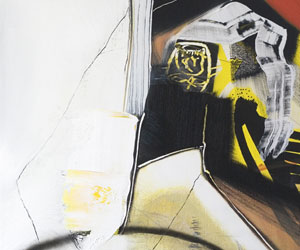 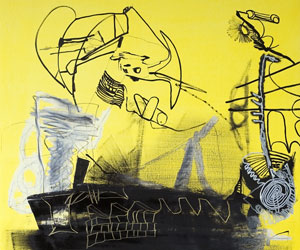 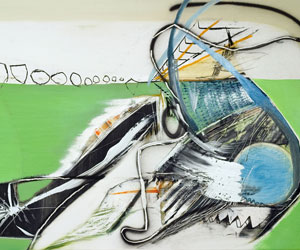