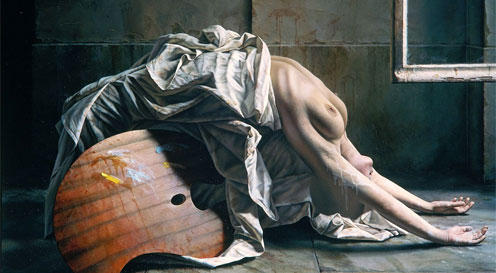 a french import from budapest

He mastered what art critics now term hyperrealism. But he did so with his very own blend of surreal elements. Having been introduced to oil painting at the age of 12, Sandorfi dedicated much of his life to perfecting his painting techniques in order to achieve the photoreal and at the same time pull the carpet away under the viewer by letting part of a person dissappear in thin air.

He worked at night and was reclusive. If he could choose, he saw very few people other than his family. The contact with galleries and collectors was kept to the bare minimum and enough to make ends meet. To begin with he survived on advertising illustrations and portrait commisions.

The artist and the collectors

Although he had reached international acclaim by the 1970s, it was really not before the 1980s and until his death in 2007 he really cracked the code. Before then he did self portraits. But these were somewhat tormented and left gallery owners with an ambivalent feelling. On the one hand they knew they were dealing with a great artist. On the other they had to accept displaying the works of someone with a very limited audience indeed.

In the 1980s he began to work more in cool blues, greens and violets. This created a delicate but psychologically charged palette as contrasted with sandy and orange. The artist applied a single strong source of semi-difused grey daylight and reflective light — a simple arrangement to give the scenes documentary authenticity – even if they were everything but.

Sándorfi and his enigmatic portraits of women

By the late eighties the subject matters were now increasingly women mixed in unusual poses with parts secluded or entirely missing. Drapery and runny paint was used as illusionary cue points to his partially disappearing parts.

This never had the character of mutilation of the figures. No rather, what we’re left with is a poetic take fleeting moment of us being a human beings. The pictures are riddles. The studio, the painting medium, and various props are deliberately fused together in compositions of beauty and melancholy. Along with depicting the human, it is almost as much paintings about painting in a way. 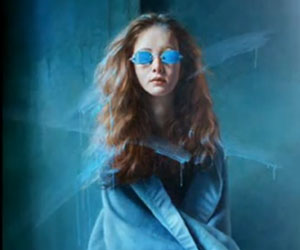 Video with the artist's work 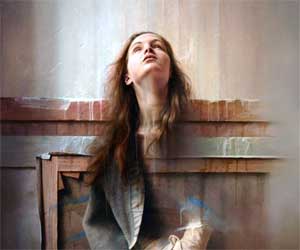