at one with the elements

Raised and educated in the city of Bonn, Ute Laum followed what both her heart and mind told her and flourished. At the fall of the Iron Curtain, she decided to move to the former East Germany. At the time that was a counter-intuitive act given that much of the migration went in the exact opposite direction. But the beauty of coastal Mecklenburg-Western Pomerania called, and off she went.

The other thing that appears counter-intuitive is her first choice of career path. By someone who should dedicate her life to painting so obviously, it is extraordinary that Laum first worked in the field of medical science. However between 2001 and 2005 she wisely lined up with fine art tuition from Brockmann and Weber in Rostock, and applied herself to her art. It has paid off and today her works are to find in collections in Germany, Austria, Swizerland, the UK, the USA and the UAE.

None of the paintings are planned but emerge through working on them layer by layer. It is a deliberate choice that frees up the painting process, but at the same time it also dictates that not all paintings fall into place without sustained effort. A composition is always a puzzle and not least when carried out by something as lofty as intuition.

The art is gestural in nature by adding just a hint of patterns or rhythms observed. Speaking of nature, the art is ignited like fireworks whilst Laum observes the scenery around her. Earth, water, air, and fire may well be the four constituent elements of ‘everything’ according to old Babylonian thinking; and while those long-held beliefs have long been called into disrepute by science, the elements serve Laum well as sources of inspiration. The work has no narrative but are colours and shapes inviting the viewers to have their own private dialogues with the art.

The best thing is to just to look at her painting for a very long time and enjoy the mix of subtlety and drama and their inherent beauty. Give it a go even if that last word ‘beauty’ became unfashionable with the advent of modernism.

If we could not show the art but wanted to explain it, we would apply one or two labels to home in on the art. That is all fine, except that Wittgenstein would suggest that language has a logic that traps our thinking in imported clutter. As a parable of subjective truth, it is like the blind men encountering an elephant. The man in the middle thinks it is a wall, the one at the tail claims he is holding a rope and so forth.

Looking at Ute Laum’s earlier work it strikes you as either Turner’esce or impressionistic landscapes. Then it quite rapidly appears to have matured leading to biomorphism and unto lyrical abstraction. This is precisely the point where chronology lead us astray. Turner predated the French impressionism. Impressionism began in 1870s. If you ignore art nouveau, biomorphism is a throwback to the 1920s. Even lyrical abstraction is late 1940s and up to now — depending on which flavour of art movement or school of thinking you subscribe to. There is no denying that those ‘-isms’ are very useful for us, but they are almost lethal for artist careers. This is because labels concern themselves with the past rather than the present. You see in order to impress our contemporary art market, much energy is invested in being cutting- if not bleeding edge. This development has made the past a taboo, and no artist wants to be an anachronism. Even calling what you do something else than established name tags is not enough. If you happen to do something vaguely reminiscent of what went before, it will be attributed to you for eternity. That is no good because the type of eternity most readily on offer is that of obscurity as an artist.

Of course time stamps are utter nonsense, because certain experiments and happy accidents will always be repeated by individual artists in any age. Gerhard Richter is one artist who is proudly indifferent to this temporal aspect that otherwise imprisons artists in stereotypes. He is first of all himself, and then he samples methods from past as well as present to express what he wants to say.

In the same token why not for once say that Ute Laum paints for the sheer hell of doing so? It neither needs a name nor a justification. She must do it, and what she does is unique to her.

You can find out more about the artist by visiting her website.

Image credits:
All images courtesy of the artist Ute Laum, all rights reserved 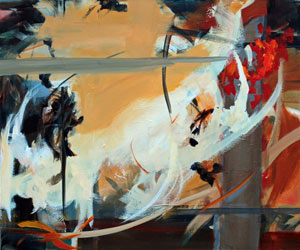 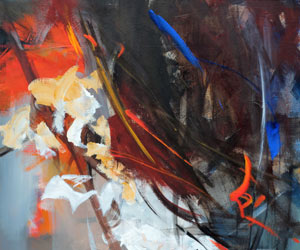 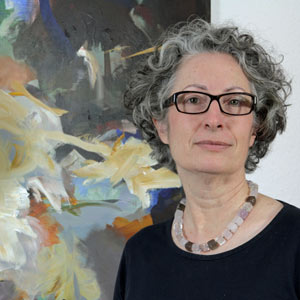