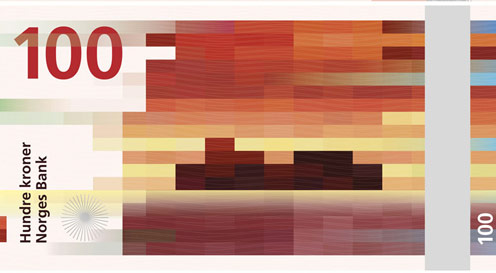 Earlier this year the National Bank of Norway thought it was time to do an oil change on their existing bank notes in order to bring them into the 21st century, and to address the ever-increasing focus on preventing counterfeiting in all strong currencies including their own.

The upshot of that was a very public invitation to artists who could submit proposals to new notes in the spring. 8 were subsequently shortlisted to take part in the final round as assessed by a jury panel of 5 external expert and one representative from the Norwegian bank. Now finally after much deliberation, the bank has not selected a clear winner, due to being quite impressed with the work.

Instead it has selected one proposal from Enzo Finger, but is also quite swayed by the runner up The Metric System and Terje Tønnesen.

Norges Bank has decided to continue with a combination of two submitted proposals for the front (see image with viking ship), and for the verso or back side it will apply an abstract pixel commentary submitted by Snøhetta Design. The reverse is so wacky and space age that it makes notes of many currencies pale into insignificance

in a sense there are three winners here, along with the rest of us.

Altogether the result of the three is a celebration of what art can bring to something as ordinary as our money, and it makes e.g. the Sterling or Euro notes look rather boring and predictable in comparison. Well, you decide. The visuals here will not be the final design but will be 90% accurate. 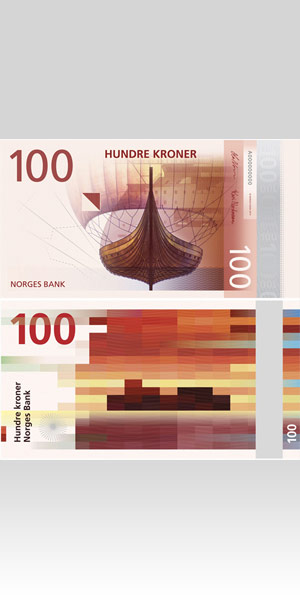