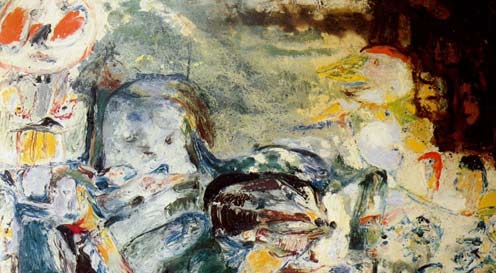 The art of being difficult towards oneself

Asger Jorn, baptised Asger Oluf Jørgensen, and brother to artist John Nash, was a European Avant-garde artist born in Denmark in 1914. As Jørgensen doesn’t really roll-off the tongue in most languages, he wisely chose Jorn after the World War II. The artist was at an all-time creative high and at his most productive between 1940-60s. Today his work is the pride of many international collectors and museums, and on rare occasions when the art is on sale, it fetches high prices.

While Jorn’s art is spread over continents, one of the largest collection of Jorn art is still to be found close to where he was born. With some 140 paintings, Museum Jorn is situated in Silkeborg and was founded on works of art donated by the artist himself followed by further purchases and donations from other sources. The museum features two of his most famous pieces of art. The 14-meter-long epic tapestry called ‘The Long Journey’ and the painting with the somewhat ambiguous title ‘Stalingrad, the place that isn’t and the mad laughter of courage.’

if you don’t go to the extreme sometimes, there isn’t much point in going anywhere

By many he is considered one of the most important Scandinavian artists since Edvard Munch. In retrospect, he is best known for being one of the driving forces behind the CoBrA art movement. But if you had asked Jorn himself, he would most certainly have regarded CoBrA as a blip in the story of his life. He went on to adopt and expand his creative vocabulary with e.g. the ‘Situationist’. At one point his experimentation involved buying insignificant and kitsch pieces of Parisian oil paintings in gold frames. He then went on to partly cover these painting with his own abstract expressions.

Being a prolific artists, Jorn created well over 2500 paintings, collages, ceramics, and an unknown number of books, notes and essays. Son of a staunch, almost fanatic, Christian father, and a somewhat more liberal mother, Jorn ended up leading a turbulent life. E.g. he recovered twice from tuberculosis, first in his younger years and later in the fifties whilst returning from Italy. Jorn’s gratitude to Silkeborg, which hospital helped save his life from serious tuberculosis and starvation is speculated to be the main reason for the artist’s later attachment to the city and his donation to Museum Jorn.

Throughout life Jorn had a tremendous energy and drive, and was extremely charismatic. He was first and foremost a survivor. He recovered from serious bouts of poverty, depressions, alcoholism and divorces always to return to a state of beng flush and happy. He was even affluent in his later years, so much so, that he could part sponsor collaborations with Guy Debord.

At his death in 1973, he was represented by 31 internationally acclaimed exhibitions and collections, but was barely known by the general public in his home country. This has something to do with the fact that international breakthrough really happened while he lived and worked abroad. His work has thus been created in Paris, Munich, Albisola, Havana and London.

Jorn was incredibly tough on himself and demanded absolute uncompromising commitment to art from himself. His expansive knowledge of literature and heritage of nordic art, together with his passion for contemporary art, made him formulate his artistic direction in writing. The direction continuously changed and was more a journey or exploration. So paradoxically as began to make sense of things, and put those ‘things’ into some sort of logical framework, he also began to abandon them. Throughout life he rebelled against any form of system or dogma, which goes some way to explain this continuous search.

Being a socialist he stayed away from the USA, and that even when Lefebre Gallery mounted a solo exhibition of his art in 1962. In fact he only visited the US for a gallery opening in 1970 three years before his death. He really disliked the whole notion of every visa application and entry to US demanding one to state that one is not a communist. The US was profoundly intrigued by the artist and admired his art in the sixties, but Jorn is alleged to have declined the Guggenheim award in 1964 in no uncertain terms:

GO TO HELL BASTARD—STOP—REFUSE PRIZE—STOP—NEVER ASKED FOR IT—STOP—AGAINST ALL DECENCY MIX ARTIST AGAINST HIS WILL IN YOUR PUBLICITY—STOP—I WANT PUBLIC CONFIRMATION NOT TO HAVE PARTICIPATED IN YOUR RIDICULOUS GAME.

By the sheer virtue of all the great art he produced, he is eternally forgiven for not being a great diplomat.

In 1936 Asger Jorn scraped all his pennies together and went to Paris on a second-hand motor-bike. His mission was to study under Kadinsky. But after having achieved this, he soon switched to study at Fernand Léger’s Académie Contemporaine. Between 1937- 1942 he attended Royal Academy of Art in Copenhagen 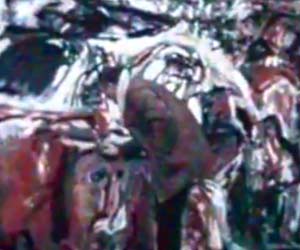 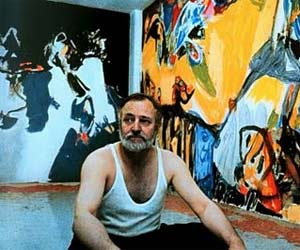