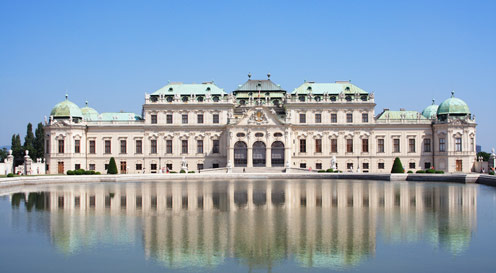 One of the must see art spaces in Austria is the Viennese Baroque palace Belvedere. Well arguably two baroque palaces known under the same title or as the Upper- and the Lower Belvedere. It is a lot of other things besides being a place to see art as you would soon discover, but in the upper Belvedere the more imposing building that you will find the art collection. It is perhaps the more complete compilations of Austrian art from the Middle Ages and up to the present, the highlights of which are the early modernism. I.e. works of the Viennese Session and the expressionists. A bit further away within the Belvedere Estate the 21ER Haus which focuses on recent and contemporary art. You are really spoilt for art exploration here, and in the unlikely event that the Belvedere is not enough, you have these art museums within 30 minutes walk: Albertina, Kunsthalle, Kunsthistorisches Museum, Leopold Museum and Mumok.

Returning to the Upper Belvedere, it showcases the world’s largest collection of Gustav Klimt totalling 24 works consisting mainly of portraits; and not to forget, allegorical scenes — one of Klimt’s obsessions on par with his sexual notoriety.

In addition, the Ober-Belvedere exhibits important contributions of art from Egon Schiele and Oskar Kokoschka. In art historical- and culturally significant terms, this era in Austrian art is often considered the biggest lasting influence that Austria has made internationally. Of course you will also encounter prominent works by the French Impressionists and a collection of Viennese Biedermeier paintings as further attractions.

Yet again the art around 1900 takes the centre stage. Among these are Klimt’s golden pictures Kiss and Judith. Both are on display at the museum and both are competing with themselves to be the most reproduced facsimiles of themselves on postcards, posters and whatnot. And why not? They are both a notch up on the scale of motional impact, and continues to catch the public imagination the same ways as does Guernica, the sunflowers, the Scream and Mona Lisa elsewhere in Europe.

The Viennese Session is a reaction agains the orthodoxy of most art at the time, and has its parallels in the German Jugend Stil and the French Art Nouveau. The Viennese flavour, however, was very Avant Garde and ground breaking for its age in its symbolism and injection of emotion balancing a stringent and deliberately composition with 3D figuration.

Hence, the Vienese Secession paved the way for the Austrian expressionism with artists such as Schiele, Kokoschka, and Oppenheimer who in turn dropped Klimt’s ornamentation and glitter.They went on to push the envelope to its limits in response to the Fauve input. Schiele can be seen at the Belvedere with his sexually charged and distorted figuration marinated in a colour palette to leave no one in doubt about the emotional import to the picture from the artist himself. Today that sounds innocent, but then it was explosive stuff and deeply unpleasant to popular Viennese taste.

The history of the Belvedere art collections

The palace first housed the collection of Prince Eugine, which from 1781 was combined with the Imperial Collection. In 1903 the lower Belvedere opened the Moderne Galerie that actively collected the art of the age. The various building then housed different art. E.g. the orangerie contained Baroque art for while. This odd mix of component parts on the estate was thus far from being a cohesive curated whole. For instance The Moderne Galerie was part of the Minstry of Culture, and it was not until 1909 that it was consolidated under director Dörnhöffer. This gentleman wasted no time in acquiring works from all epochs of Austrian art thereby connecting the dots.

It was all Bliss for a while, but during National-Socialist regime the Moderne Galerie was closed. It almost exclusively housed “degenerate” works of art. Good news is that the works were neither confiscated nor burned and that explains why they are still with us today. After bouts of refurbishments and the shuffling around of inventory we are coming right uo to our age, and today the entire collection is to find under one roof in the upper Belvedere.

Open all days in the week except on public holidays

There are various options of guided tours available as well as portable audio-guides. 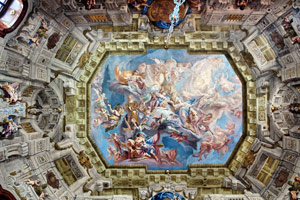