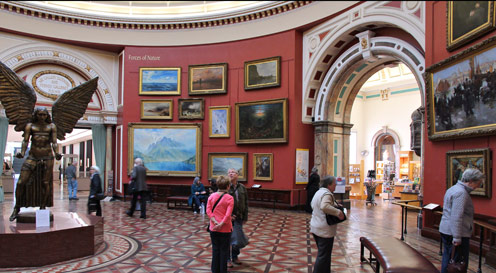 Wedged in between Edmund street, Chamberlain Square and Victoria Square in Birmingham, you find the Birmingham Museum & Art Gallery, also known as BM&AG or BMAG.

The place is big and has a lot to offer which means you better set aside a half to a full day if you want to see everything. BMAG is housed in a beautiful but monolithic grade II listed building sampling an eclectic mix of architectural styles only held together by a consistent choice of stone. At the top it has what might be best described as a sort of Christopher Wren dome, and the main entrance that faces Chamberlain Square has an impressive portal fit for an ancient Greek temple, except for something to the left of itself. At closer inspection that vertical ‘something’ is a tower that looks like a shrunk down version of Big Ben in all its ‘Gothic revival’ glory. But saying it is gothic revival would be inaccurate, because you then discover the tower is topped off with a French hipped renaissance roof. Whatever it is, the locals lovingly refer to it as ‘Big Brum’. Further to the left you notice a skyway across to the opposite building on Edmund Street, and that appears to be constructed in a distinctly Roman style.

With 856,000 annual visitors to its 40 galleries, BMAG is one of the most popular museum venues in Great Britain; and it is not difficult to understand why. The museum and art gallery has something for everyone and every interest, and not least the art aficionado who is being welcomed by most of the space dedicated to art. The art space is made up of permanent exhibitions and quite large-scale temporary exhibitions mounted either in the main building or in the connected Gas Hall. The latter is accessed either direct via Edmund Street or via the aforementioned link bridge across from the main building.

The art collection is characterised by quality in surprisingly high quantities. It includes works of art from the 4th to the 21st century. The usual suspects for an English collection are represented: Francis Bacon, John Constable,Thomas Gainsborough, Patrick Heron, Willian Hogarth, Peter Lanyon, Stanley Spencer and JMW Turner. But what you also find is landscape artists from the local Birmingham School of painting represented by Creswick, Baker and Cox. There’s also a decent amount of Italians such as Giovanni Berlinni, Sandro Botticelli, Giuseppe Crespi and Orazio Gentileschi. If you want antiquity, there is a modest amount of Egyptian, Greek, Etruscan and Roman art to find as well.

Every museum holds a trump card, and BMAG has three aces. One is their temporary exhibitions including the way they never fail to engage the minds of the young visitors. The second is a very regional focus with exhibitions dedicated to the local history be it artistic, industrial or other.

But the third and perhaps most important is the Pre-Raphaelite art (also spelt Pre raphaelite or preraphaelite not to upset anyone). If you are interested in the Pre-Raphaelite Brotherhood or artists associated with Pre-raphaelites, BMAG has the absolute largest collection of their work and the more important pieces are on permanent display. Along with other sponsors, the museum also offers a separate website dedicated to the works of the Pre-raphaelites: http://www.preraphaelites.org/.

Birmingham Museum & Art Gallery is an accessible and incredibly family-friendly experience, with a busy program of activities. Admission is free except for some temporary exhibitions in the Gas Hall. For more information please visit their official website. 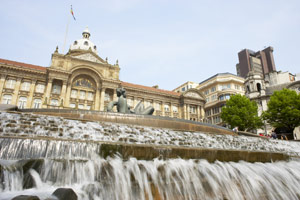 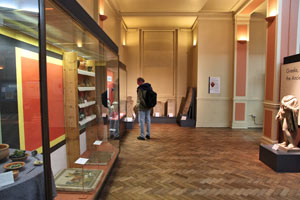 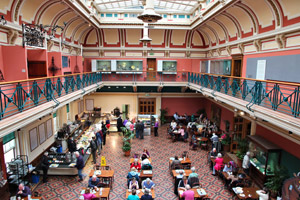