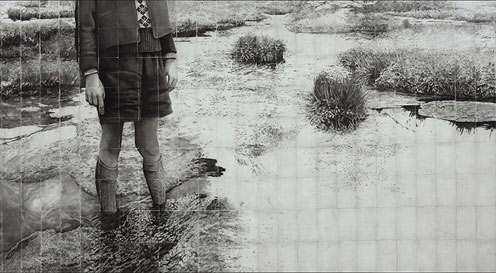 a sea of controlled emotions

The oevre of the prolific Serbian artist Bojan Radojčić (b 1981) is varied but distinctly his own all the way through. He often uses perishable media such as book pages and draws over them in tiled mixed media montages. It is as if stuff is already wilting away a little, and we’re left with the feeling that we better watch carefully what’s there right now lest it is gone for eternity.

Three large drawn installations composed of multiple A4 sheets form ‘The Trilogy about the Boy Who…’, and each explores the theme of self-sacrificing from different perspectives.

More than once the artist mentions the willingness to make certain sacrifices in order to achieve certain things that you’ve waited to be able to do for some time.

Yet, to Bojan Radojčić his art may well be our human condition and the stories we have told since the beginning of our civilisation. An excerpt from his website sums it up:

“Many of the myths, legends and religions are based on a conscious act of self-sacrificing of an individual or a group of people for a sublime idea or principle. This act has become a commonplace and a must do in the concept of creating of heroes and great epic poems. The story goes that two thousand years ago an ordinary carpenter decided to sacrifice himself in order to take all the sins of the world on him and save humanity. Today, there are over a billion of people on earth who believe in this story and celebrate the man who by sacrificing himself became the most famous person ever, although there is no historical evidence that he existed at all.

By raising universal questions, Bojan Radojčić is trying to say something about the structure of the modern world, about moral principles of the new age and to give an ideological context for overcoming such situation.”

Aside from this body of work, his production could be summed up as a sea of feelings be they pleasant or unpleasant. The latter are captured in some sort of bubble from a bygone age and more often than not rooting itself firmly in childhood. However when talking about feelings, it all a bit reticent, subdued or sub-something at first. Is it not?

The artist is fond of a number of things in his art practice besides rythms and thematic duality of suppressed euphoric mania on the one side and melancholy on the other. Characteristically, the young artist has already produced series of works conceived as trilogies. In the previous context, it is as if he instinctively knows that one piece of work is never quite on its own. Simply, the emotion that created it, gradually transforms into the next as if they’ve been melted together. It is an honest way of saying that everything doesn’t divide up into building blogs just to serve us.

You can visit the artist Bojan Radojčić at his own personal website. He is currently being represented by Galerie Pi in Denmark.

Image credits:
All the art and photography by courtesy of the artist. 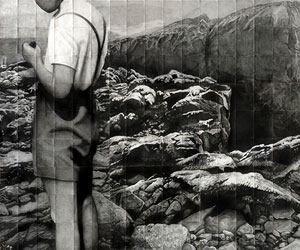 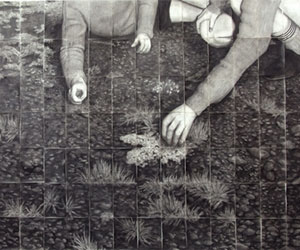 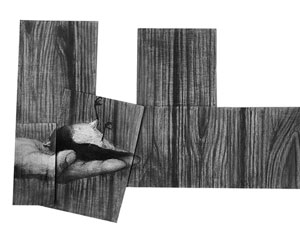