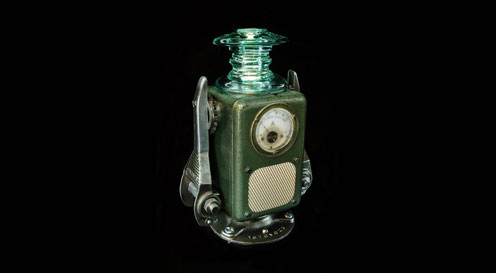 Every artist has a toolbox and a mental framework. For Bruno Lefevre-Brauer those two overlap in a clever way which resonates with the popular word ‘Upcycling’. For the unitiated upcycling is the process of converting waste materials or useless products into new objects of better quality or for better environmental value. The term was coined by Reiner Pilz as recent as in 1994, but in reality he just found a word for a phenomenon that has introduced us to some of the most significant art of the 20th and 21st centuries.

In France and in Italy there are proud traditions in recycling the scrapyard in art, and it has more than a few ironic parallels to the film Micmacs à tire-larigot Directed by Jean-Pierre Jeunet.

More appropriately perhaps, think of the European Dada, though very much influenced by French artist Marcel Duchamp and his ‘ready-mades. Or think the Italian cousin of found objects. I.e. the modern art movement Arte +
Povera with Celant, Boetti and Pistoletto.

It is clearly here to stay, though in its more current flavour it is less formal and spiced up with poetry, intrigue and hilarious wit. The result has rightly or wrongly been termed the intersection between fine art and design. Sooner or later an art critic would have to term this the ‘dartsign movement’.

However, the bizarre thing about this genre-defying phenomenon is that the establishment agrees it has something of cultural merit for us all. The trouble is however, that the very same people have a hard time seeing it as ‘fine art’. Conversely, if you asked a designer, s(he) would love to collect the objects for their wit and aesthetic value alone, but dismiss them as design due to being purposeless, dysfunctional, unikas. In other words, the schooled idea of industrial- or product design suggests that what we have here is the exact opposite.

The French artist +Brauer is no stranger to this, and somehow manages to straddle the fence. He has decided to term his work art and has subsequently exhibited widely with his robot sculptures, robot heads and other emitting objects in his home city of Paris, Amsterdam and Madrid. The artist began his career in graphic design. It may sound odd at first, but really is not. You see Graphic designers are a peculiar bunch in the sense that they are creative in other ways, and do either painting, music or writing outside work. More often than not, they are competent but frustrated artists who have merely been sensible enough to opt for a commercial career first. Anyhow, eventually +Brauer found his way into Illuminated Robot Sculptures, the result of which became the series “Viva la Roboluciòn!”

From his workshop in Paris, his stance is a poetic resistance to mass-consumption, and his unique robot sculptures get away with quite a lot. There is a certain magic to adding two dots to something, and suddenly it has life and a beating heart in our minds at least. But more than that, the sculptures are tapping into popular perceptions of the androgynous-, mechanical- and cliché idea of robots that entered the realm of 1950s sci-fi. Lefevre-Brauer spends much time sourcing the perfect objects. They are not just what will do at the minute. No they are carefully selected for a number of other criteria. Some of their charm clearly come from the these industrial parts being blessed by the sum of patina, wear and tear. As interior installations, they have a life in the day as well as night. In daylight you may enjoy their aesthetics and colours. At night, they emit light.

You can find out more about the artist by visiting his official website.

Image credits
©All images are by the courtesy of the artist Bruno Lefevre-Brauer , all other rights reserved. 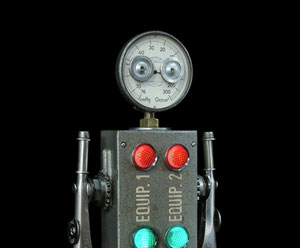 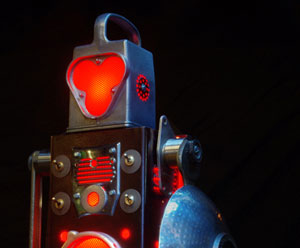