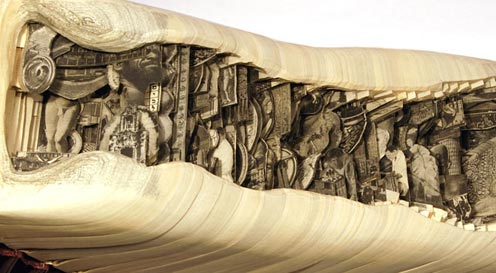 A sharp incision from the book surgeon

Brian Dettmer is a prolific American artist based in Atlanta. His exhibitions abroad is earning him increasing international reputation. On his home turf, he is represented by the Kinz + Tillou Fine Art in New York, Packer Schopf Gallery in Chicago, Toomey Tourell in San Francisco, and Saltworks in Atlanta. In Europe he is represented by the Catalan gallery Mito in Barcelona.

Leaving the painting behind was part of the process

During his education in Fine art at Columbia College, Chicago, he focused on painting. A defining moment was a period just after completing his Bachelor degree. Dettmer, as so many other artists before him, worked with graphic design to make ends meet.

Nothing unusual so far. However, the experience of this day job slowly but surely made Dettmer explore the multi-layered relationship between text and meaning. It made him examine codes and syntaxes and to think about the signified and the signifiers that transcend our own lives.

As a result the originality of what he does today is profound. As far as we know, no one does exactly what he does or anything like it. He often sculpts out his work in the sense that he removes in order to arrive at the desired result. But it is not by chisel, but by a surgeon’s scalpel of the kind so extensively (ab)used in any graphic design studio before the advent of computer design.

As he cuts away unwanted material, he stabilises the remaining paper with a varnish; and enhances some parts with acrylic medium. More recently some of the books have received a more organic feel through sanding.

I work with knives, tweezers and surgical tools to carve one page at a time, exposing each layer while cutting around ideas and images of interest. Nothing inside the books is relocated or implanted, only removed

He creates ‘altered books’, sometimes titling the results with exact titles of the books being altered. And why not use books as an art supply? Most of these objects are ultimately destined to rot away in landfill sites – or at best – be recycled as toilet tissue. In the case of reference work, encyclopedias and Atlases, they have been printed in large volumes and new science has long disproved the factoids within. Initially, there were more single volumes, which then soon became more volumes sealed together in fan-like or 360 degree rounded constructions. Alternatively they formed wall friezes, diptychs or more complex 3d constellations.

Whether intended or not, Brian Dettmer preserves two timestamps in this process. The age in which the art is being created, and the time of the published raw material. This is undoubtedly also part of what provides extra, and perhaps unintended, depth to Alighiero Boetti from the Arte Povera movement. It is also similar to the sensation of discovering a food rationing stamp from World War One placed in a dadaist collage – which in turn, and paradoxically, did not set out to convey any meaning whatsoever.

The artist is not just using books exclusively, but several spent media be they vinyl records, tapes, maps, or discs. Some of the more thought provoking pieces were created with cassette tapes molded by heat to create skulls of extinct animals. It simply speaks volumes on evolution and mortality of everything from mammals to media.

One doesn’t have to be slowly dying or smell that way to understand. Logically, all carbon-based life will be recycled many times over. The plastic in the casette tapes is a waste product from the oil industry, and oil is fossilised plants and animals. Another poignant remark from Dettmer’s is his black funeral flowers created from VHS tapes of the Goodfellas. But it is as if, it is the altered books that curators respond more to. Sometimes others decide what an artists legacy should be. In this case it might be the comfortable pigeon-holing of a clever ‘book carver’. As another example of the variety in the choice of medium, Dettmer created really remarkable framed work using ink on paper called the ‘facts on file’ with which he appears to have made full use the typographic expert knowledge obtained earlier in commercial design, but used it to create art. It has some wonderful likeness to Stéphane Mallarmé Il Pleut.

Altered books and what we ask them to tell us

Understandably, people can be very sentimental about books, but in reality we’ve had thousands of years without them being the dominant form for outering human thought and transcendence, and times have always been transient.

It is not as if we didn’t see it coming. The book culture as the dominant determinant was countered early by the thinking and prophesies of Walter Ong’s socalled secondary orality. Secondly, it was conveyed by Marshall McLuhan’s ‘The Medium is the Message’, ‘The Gutenberg Galaxy’ and ‘Counterblast’. While writing, he coined the terms: ‘global village’ and ‘electronic cottage’ – But that is a red herring worth frying.

However, it addresses the philosophical implications of the printed medium becoming less important. It also partly represents Dettmer’s intellectual contribution to society. Being the observer, though neither for – nor against, he is aware of the downside to all the merits of the information highway. In an age where all photos of our loved ones, and all our intellectual capital live in cloud computing, we have hedged the risks. But all it takes is one electronic sun storm or atomic blip too many, and the human civilisation must be reinvented. But a more mundane example is that computer files generated with some proprietary technology ceases to work after a couple of years.

Dettmer is meticulous in method and thinking

After the 20th Century modernism, which ended being as dogmatic as everything it rebelled against, you rarely found artists whose detailed method of working provided them anything but a life in obscurity. As an example, think of Maurits Cornelis Escher as someone just about tolerated, because of his strong import of mathematical genius. Another exception to the unwritten rule of tolerance is the permission of detail provided it results in 100% non-representational or non-objective abstraction.

However, In this second decade of the new millenium you can do anything, and there are no longer any defined movements that sweeps across the art world as a steamroller. Everything is art, even a Turner prize winner who switches the light on and off. And so it should be – indeed. While all these things that pull in opposite directions co-exist, there is also a real legitimacy to recycling the heavy baggage of several centuries of accumulated art. Much of todays music is (re)sampled to something new, so why not all forms of art?

One of the things that the modernistic age chose to rule out of its design vocabulary was the fact that we need complexity as much as we need simplicity. the need for the complex, is very much acknowledged by John Maeda, who is the author of ‘Laws of Simplicity’. Take also the sheer complexity of Jackson Pollock’s art with its filigree intricacies and how attractive we find it. We might even need pointless details to stimulate our senses, though with Dettmer’s work you are still left with a strong impression of everything having been left there to support the integrity of the concept.

Either way, Brian Dettmer’s work is a breath of fresh air for not really conforming to the last century. At a quick myopic glance, the detail in Dettmer’s work could remind you a little of some of those big Thai wood carvings in intricate 3d detail. However, the wood carving is a craft with a very exact outcome of just being intended ornamentation, the result of centuries old Siamese tradition, and the pieces are hardly unique.

Letting artistic chance happen but not by chance

In contrast, Dettmer’s work begins somewhere with a clear idea, and then allows some of the accidents determine a way through. I.e some of the breaks in this termite activity are owing to the discovery of a good image or word worth preserving. In this context pure accident alone appears as undesirable and utopian as its opposite. Even random bookworms are selective about the types of ink they want to eat.

The implication of ‘chance’ is then not the same as saying there is no concept or strategy. No, Brian Dettmer simply uses it as a welcome catalyser in his art as he does with so many other things. It is not the plan but the tactics of getting there, which alters as you go a long. The aviation industry knows this all too well, because it is only when a plane takes off and when it lands that is it on course. 98% of time it is slightly off course continuously altering direction and altitude within the bounds of an agreed flight plan – weather permitting.

You can find out more by visiting the artist’s website 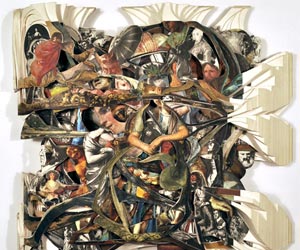 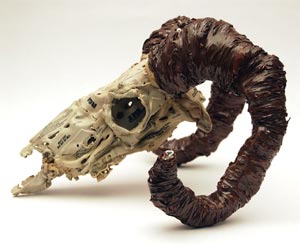 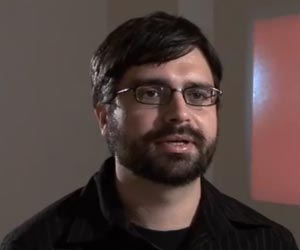 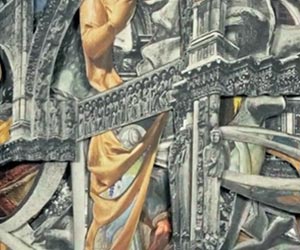 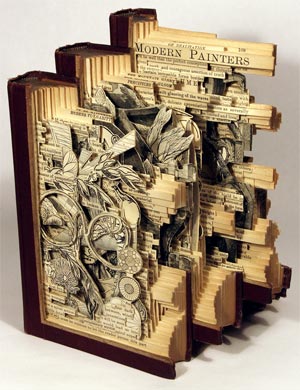