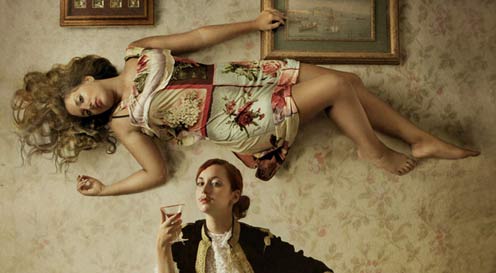 enter a world all fersiniesce

Chiara Fersini is a young artist who shows great promise. She sometimes works under the psynonym Himitsuhana, said to be Japanese for ‘secret flower’, and a name given to her by a friend in Japan.

A defining moment for Fersini was in fact a stay in Japan. It co-incided with her feeling a great urge to photograph, and she has photographed relentlessly ever since.

Raw talent and personal drive takes care of the rest, and she is being noticed. As it turns out, her mystical-realist style has proven irresistable with book publishers who have bought her art for book covers.

Each composition is carefully staged and worked upon for some time. By the artists own admission, she has already spent a small fortune on the right props to figure in her works. Once everything is as far as it can come in the photo take, an ardious process of image manipulation and retouching takes place on the computer.

In all this you may detect a mix of human fragility, fantasy and a sense of existential ambiguity. Female sensuality may also appear in the art without it ever being over the top.

Bringing yourself into your art -literally

Many Artists are the worst candidates for curating their own work. In contrast, Fersini’s portfolio shows remarkably few pieces out of tune with the rest. Self awareness and critical evaluation is what it usually takes to achieve this. But it may also come down to another important ingredient:

Fersini herself appears in much of her work. It provides a welcome consistency that binds her production together. Still you have to check whether it is really her, because of her frequent changes of wicks and atires.

On that note a number of people could jump to conclusions about this type of self projection. They would immediately assume that the artist has narcisistic traits.

Indeed, some art historians even conclude that about artists centuries after their existence. An example is Albrecht Dürer, who created an awful lot of self portraits. Post humously, he has been labelled a little self-obsessed with all the psycho-babble to boot. On balance, though, the circumstantial evidence is stacked firmly against Dürer. He once had the audacity to paint himself in an obviously Messianic fashion, and then you must earn some notoriety. On the other hand, Rembrandt – another great self portraitist -simply recorded himself aging, whereas Frida Kahlo resolved her existential dilemmas by figuring firmly on her own canvases almost as part of diagrams (cf Henry Ford Hospital, oil on canvas 1932).

Think about it. You don’t have to fork the bill of hiring models from Central Casting Agency. Besides you know that you are available at all hours. The list of artists who have realised that is endless. Gilbert and George, bless their cotton socks, figure in much of their own work. Murakami appears as a manga cartoon figure in some of his vibrant work. All three soft-spoken gentlemen come across as everything but narcisistic. If they can import their thoughts into their art, why not import visual representations of themselves as well?

The last bit ties in with Fersini’s own rationale:

It all starts with inspiration. In general the birth of a photo implies a very long mental process, in which I develop the story first in my mind and then transfer that idea into a photo and the result is almost the same image I had in my mind. Sometimes it’s like an uncontrollable impulse that makes me take my camera and shoot and only then I figure out what I have done. What I feel when I create is the best part of making photographs. As I always say photography is a cure for me. I take photos because I need to. I would say each photo of mine reveals something about myself because each photo is the snapshot of an emotion, a feeling, a state of mind and this is also why I take mainly self-portraits. It’s like I manage to put my fears, my joy, my worries into my works and seeing them happening in images is a manner to feel free

To find out more, please visit the artist’s own website. 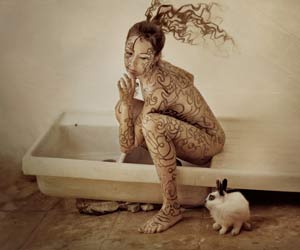 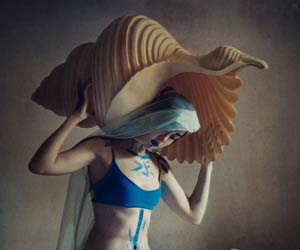 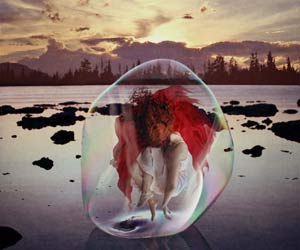