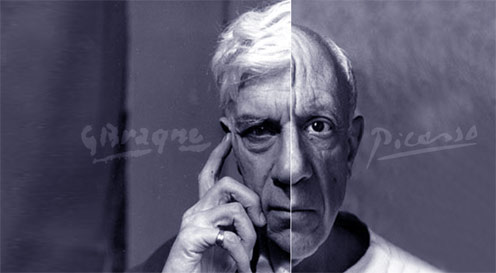 As seen through the prism of Cubism

In every form of art and in every age, seemingly odd couples appear. The year 1902 is no exception in that respect. One is a Spanish painter who pastiches various painting styles aimlessly until he stumbles upon his sidekick. The sidekick, in turn, is a French artist, who once thought himself a fauvist, but quietly knows it is never going to be wild enough. Together and apart they come up with a visual vocabulary, which resonates with us to this very day.

Two pioneers and their art, yes but?

Although Cubism is a commonly recognised word, and one of the most well-known art movements in the world, defining Cubism becomes complicated quickly. Alliterations aside, Cubism’s beginning and end are both not concrete, and though we hear and consider it common knowledge to learn about Cubism or be aware of it, it’s still one of the more mysterious art movements once you delve behind the obvious name that Picasso and Braque provide.

It is widely known that Georges Braque and Pablo Picasso pioneered Cubism somewhere around 1907. But once we look beyond that fact, we are left with various themes and a visual experience which befuddles the viewer and leads to only more questions, never a set answer.

What cubism has to offer

To get an idea of what Cubism is, and when exactly it starts, would almost ruin the charm and confusion it offers. Looking at the title almost obscures the delight that an Analytical Cubism painting proffers to the viewer. The title appears to pull the curtain under the senses, not allowing the viewer to be tempted and offered an opportunity to unravel the various shapes and angles that are being hurled at him. The Reservoir, painted in 1909, remains a wonderful example of this kind of hint that Picasso gives. It’s obvious once the title appears.

The curve of the lovely bridge’s arch becomes blatant, and the various towers and rooftops are charmingly placed. Timothy Hilton, for all his faults, describes The Reservoir as “clenched”, a “determined painting”, and “bold”. These are all truthful statements, and though The Reservoir is hardly mentioned in more than a couple of sentences, it’s a fantastic still-life that Picasso painted that perfectly portrays how the title doesn’t quite ruin, but somehow gives it all away. This is a characteristic in Cubism that shows up again and again, whether it be in a Braque or a Picasso, this idea of a name.

In comparison to Picasso, Georges Braque more or less leaps across a giant crevasse from being a Fauvist to becoming a Cubist painter. While Picasso is painting harlequins and experimenting with the Rose Period, Braque is being bold with colour. It is during Analytical Cubism that he and Picasso begin their epic paintings that become so alike.

Braque reverts to a polar opposite of his old style: monochromatic, usually brown schemes. They are equally beautiful to his Fauvist works, but in a very different sense of the term “beautiful”. As Christopher Lyon writes for the Metropolitan Museum of Art:

It was during this time that they both painted and mapped out the angles of Analytical Cubism.

During the year of 1910, Braque and Picasso created incredibly complicated works, among them, Violin with Pitcher, which Braque paints with a grey and brown scheme, and Ambroise Vollard, painted with a yellow head for Vollard. These two paintings are seemingly, at a static point of view, similar. Upon any sort of detailed view, however, it is clear that Braque is succeeding with his layers, shadows, and perspectives more at this beginning point of Analytical Cubism. Vollard is painted by Picasso as dynamic, and intense, however, putting up a good fight and still being completely cutting edge. Braque paints the more easily relatable subject of a violin, with the lovely handle and the tuning strings making cameos. The flash and glint of a water pitcher from multiple angles allows the eyes to be stunned again and again, and although the painting is actually in a rather muddy coloured palette, Braque makes it amazing. Although, as mentioned earlier, some of the fun is taken by reading the title, it is evident that a wonderful musical instrument is in there. Picasso’s Vollard needs no such introduction, and the title was unnecessary to discern the blank eyes and Cubist angular frown on Vollard’s face. Both of these are excellent examples of early Cubism that help show the future forms and goals that the artists hope to achieve.

Their goals and ideas that they focused on in Cubism differed, as Hilton notes. “Picasso…said: ‘Cubism is an art dealing with forms’”, whereas Braque noted that “the main preoccupation of Cubism…was the materialisation of that new space which I sensed” (Hilton). This can be seen through the way the head of the violin is depicted in Braque’s Violin with Pitcher, and the way that Picasso breaks up Vollard’s face into different sections. Despite the different goals of the men, it is obvious that they were working together at this time, and that they were in close contact. At this point they are both still feeling out where Cubism is going, and laying a trail of their soon-to-become common themes, among them, musical instruments, café tables, and glasses.

The Aficionado painted in the summer of 1912, shows where, roughly two years later, Picasso had arrived. Here, he has taken a newspaper, various tabletop objects, glasses, and a man, and broken them up…but with the addition of the idea of space, which was mentioned to be Braque’s ultimate goal. In the Aficionado we see the convergence of their styles. This painting is also in a muddled brown, a not definitive colour, but rather one for contemplation, much like the aficionado pictured is probably engaged in. This is also about the time where we see collage coming into play, which is probably the most marvelous thing about Cubism, the idea that collage can become placed into fine art. The aficionado’s face is broken up like shattered glass, and it appears so much like Braques Violin with Pitcher, just slightly more angular. Even the shades of brown appear to be the same.

Analytical cubism, what came after, and the oft-chosen subject matters

Despite the fact that they are addressing the exact same objects at the same time as a result of working together, they still have very diverse paintings. Analytical Cubism, which is the earliest stages of the Cubism movement, begins to feel out collage, colour combinations and subject matter. This smattering of ideas comes together very well in Still Life with Chair Caning, which is another 1912 painting. Picasso’s voracious appetite for canvas to be covered, for art to be made, is famous, and his paintings are bursts of vitality. Still Life with Chair Caning shows this perfectly. The collage of the caning, mixed with the various objects on the table, create a visual field to play in. Here, Picasso does not name the objects in the still life, which leaves a chance for the audience to take a gander at what he depicts. A lemon appears to be there, which hints to some sort of drink. Here, Picasso uses a black and brown scheme, with the black highlighting the “Jou” spelled out and outlining the chair caning collage piece. There is a bit of yellow which lights up the painting, and the rope that surrounds it would seem awkward but, because we are dealing with Picasso, seems to fit perfectly.

Even if comparing the pieces that they created is useful in helping define Cubism in vague terms, there is still the notion of it’s origins. Which man, Picasso or Braque, created Cubism first? The answer to this remains somewhat unanswered, and maybe it is less important than finding its intellectual influences. Picasso was influenced by his fascination with African and Iberian art. Cezanne also played a definite role in getting Cubism off the ground before dying in 1906, and therefore never had the pleasure of seeing a Cubist painting, his still-lifes and various paintings devoted to the mountain outside his home are all about space, angles, keeping a canvas in the 2-D realm. Through some strange hybrid of this Frenchman and the African influences, we can locate the origins to the curious Cubist movement.

One of cubism’s retrospective achievements

All of these things that Braque and Picasso attempt and succeed at are challenges, blatant challenges to the idea of space, our location in that space, the “reality” of objects, their angles and details and how they relate to our visual senses. They are adventurers, pioneers, on a whole other level from almost every artist. The world in 1910 and onward was barely escaping from the clenches and social norms of the Victorian era, and here were Picasso and Braque, comparing, documenting and thinking about the future of painting and completely pushing all of our pre-conceived notions about the idea of art. 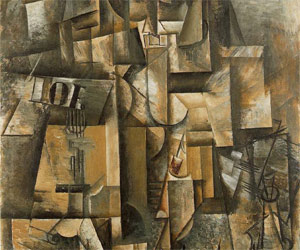 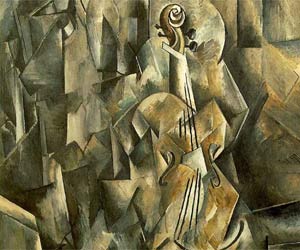 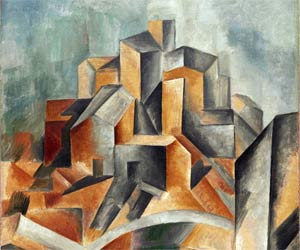