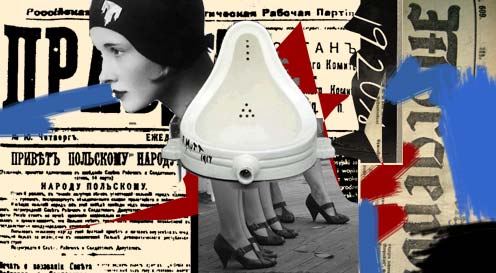 Dada, a cultural phenomenon from between 1916 to 1922, was essentially dualistic. On the one hand it was characteristic for its Destructivism. On the other it was a playful and idea-rich art movement. As a self-professed non-art it could not avoid becoming art in its own right —and its own cliché in our time.

There is of course a preamble to DaDa. We might regard it as the great international swap of artists, who did not want to be drafted to the army in their own nations. In 1914 the first world war broke out in Europe, and artists such as Francis Picabia and Marcel Duchamp suddenly became emigré artists due to their pronounced pacifism.

The Dada non-aesthetic is said to have been carved out by the Romanian Tristan Tsara’s publication of the journal Chemarea in 1915. But the more formalised idea of what this mode of expression was exactly, and what to name it, came in 1916. Tristan Tsara, Hans Arp and Hugo Ball moved to Zurich where they and other likeminded created Cabaret Voltaire

The childlike almost onomatopoeic word DaDa is originally a french word for scapegoat and was a title of a play consisting of pure non-sensical audio-visual performance. Richard Hulsenbeck simply stumbled upon the word to name the play, and it was subsequently adopted for several art forms from that vein. An important side of all this was to mock the idea that society could solve every existential problem with logic, scientific and collective efforts.

Super-DaDa was not the invention of Superman

In 1917 Hulsenbeck moved to Berlin. Together with Georg Grosz, Raoul Hausmann and Hannah Höch, he founded Super-DaDa. The group created wonderfully bizarre and satirical works in photo montage and assemblage art. Painting and drawing was an equally freestyle sport compared to other contemporary art of the age. Found every day objects were stuck to canvasses as blended with typographic objects and painted.

Merz and the spread of the art movement

The DaDa movement spread to many cities. In Hannover, for instance, Kurt Schwitters created some of his best assemblage work now often used by art historians to visually summarise what DaDa was all about. Schwitters was fond of creating collages. His method had a separate name called Merz. Even that term is idiosyncratic for a movement that championed accidents and chance events. Merz simple came from one of his works which casually included part of a bank logo: Commerz und Privatbank. In Cologne DaDa thrived equally well amongst artists such as Max Ernst and Jonannes Bargeld.

However, it was not just a German-speaking world that Dada took hold, Francis Picabia moved to Paris where he worked with local artists. New York also simmered away quietly and into its own flavour of Dadaism. It rapidly spread to other cosmopolitan cities in Europe including Milano and Rome in Italy.

The formal framework of the dadaists

For an art historical age that had a proponsity to manifest many manifestos, DaDa did not escape receiving its own. In 1918 Tristan Tzara formalised the DaDa manifesto, and in 1920 the first official DaDa exhibition was mounted in Berlin.

I have no right to drag others into my river, I oblige no one to follow me and everybody practices his art in his own way

It is perhaps fair to say that DaDa paved the way for discourse over our modern age. It clearly led to the spin-off Bauhaus. Not to mention Man Rays and Duchamp’s ready-mades that still haunt debates over what can be classed as art. Other things came out of Dada. Due to a dispute, André Breton left DaDa to create Surrealism in 1924.

Where can you find DaDa art today

You can find Dada art in many collections today. The works Kurt Schwitters can be seen in Tate in London, and the Albertina in Vienna. The works of Rauol Hausmann can also be found in Tate, and in the Berardo Museum in Belém near Lisbon.

Hannah Höch can be viewed at the National Gallery in Berlin, Nationalgalerie, Staatliche Museen zu Berlin. The Janco Dada Museum is located in Ein Hod, Israel. It is a museum that exhibits the work of Marcel Janco as well as art from the Dada movement. 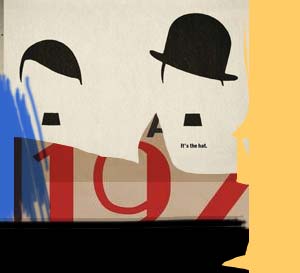