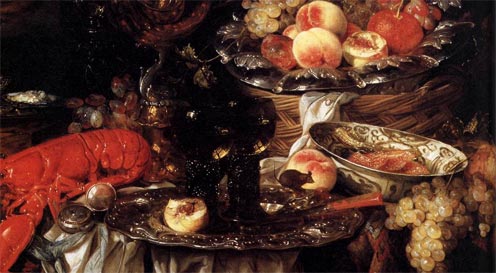 17th century reloaded: a reminder of our mortality?

By using basic elements of Dutch symbolism and composition, re-creating a still-life from the Dutch golden age, it ended up being a challenging but rewarding job. Focusing on the use of the objects, and how they work and do not work in real life, and the various ways in which they tell the viewer how to react or how to interpret the objects, still-lifes are immensely complex and codified but at the same time aesthetically pleasing. Despite their pleasing and innocent appearance, Dutch still-lifes are nearly impossible to re-create naturally. It not only reflects the complexity of the arrangement of objects but also the vast amount of codified knowledge within the painting.

Fetching the ingredients of the still life

When first considering creating a still-life, the materials were the main focus. What sort of fruits to purchase? What sort of flowers? What kind of fruits are even in season? Upon venturing to a nearby greengrocers, tulips were widely available, as were lemons, apples, oranges and tangerines. Green and purple grapes were available too. The cost of purchasing all the materials turned out to be relatively small. Whilst paying for the these bits and bobs, I considered how vast still-lifes by Jan Davidsz de Heem and Abraham van Beyeren appeared. There are hundreds of grapes, enormous vases of flowers, extravagant props like vases and porcelain dishes, not to mention the absolute excess of fruit, which perishes quickly making it an expensive exercise.

In Hanneke Grootenboer’s The Rhetoric of Perspective: Realism and Illusion in Seventeenth Century Dutch Still-Life Painting, “art lets truth originate”, but here it is clear that these paintings are rather telling a slanted truth, if any truth at all:

1 It would be improbable to imagine an artist setting up a vast, delicate display that would take hours to construct. The realistic look does not fit the reality of the situation.
Grootenboer goes on to discuss how perspective tricks the viewer into believing that there is “naturalism” in a work- even if there isn’t, even if the perspective is in reality not up to mathematical standards.

2 In viewing a still-life’s perspective, it is often skewed to make the table larger, or the angles worked so as to make the grapes dangle off the table just so. Perspective “complicates the relation of image to meaning”, as Grootenboer puts it, where the artist uses a certain perspective to emphasize a certain point or idea.

3 As I was preparing my still-life, I arranged grapes in a crystal candy bowl, and tried to make a beautiful pyramid of them and have them dangling over the edge right. In reality, gravity and physics worked against me- a Dutch painter can control those elements on canvas and warp them. The idea that the painter has complete control, however, over every element of the painting, is somewhat false. The Dutch in the 17th century were engaged in what must be one of the most addicting pastimes to hit the globe: capitalism.

Painters belonging to guilds had to supply paintings where there was demand for them. With all of the Netherlands engaging in some sort of commerce, naturally, they wanted to celebrate this good fortune. Still-lifes, to a certain extent, fulfilled that role for boasting- though carefully- about their goods, says Hal Foster.

4 By placing Oriental jugs and nautilus cups on elegant Turkish rugs imported from Istanbul, the artist is providing a service to the merchant or businessman who engages in the trade or selling of such things. My still-life would preferably be more for a fruit market, but exotic nonetheless: a Turkish scarf substituted for the Turkish rug, but it was from Istanbul, so the genuine feel of lush, exotic places still came through. The piling of the fabric in places mimics the rich bunching of textiles on table tops to show the luxurious sheen and imagined feel of such a fine product from such an interesting place. The first purchasers of still-lifes “came from courtly and aristocratic circles”, then moved into the high middle class sector- an artist must produce the right kind of still-life for his patron and for his market.

5 The large still-lifes display lavish feasts and objects ordained by the patron, and the “prestige” brought to these painters if their patrons approved of the work. Capitalism comes through many Dutch still-lifes in the 17th century.

6 Another, perhaps paradoxical quality in still-lifes is the constant moral reminders imbedded within. Capitalism paired with a society so bend on morality that sexual relations are meant to be solely for procreation creates a very aware and ethically bound people. As we have studied thoroughly, the codification of Dutch iconography is ingrained into the society through text and imagery, as Dutch society was the most literate in Europe. The grapes dangling off a sumptuous table are genitalia- as is the open pomegranate, a symbol for life and the potential of life.

The flowers are momento mori- symbols for mortality and the idea that our time is fleeting on the planet. Every beautiful tulip will wilt, and every piece of fruit with rot, eventually. Peeled fruit, especially, shows that time is already taking its toll, as the peeled fruit will decay much faster. While attempting, as Abraham van Beyeren does so often, to peel a lemon as he does, it quickly became apparent that although peeled fruit has iconography attached to it, it is also ridiculous to attempt to peel a lemon. The first lemon I attempted to peel became squished and rather mutilated, and the second one I merely cut in half. I don’t know if a lemon cut in half has a specific iconographic meaning, but the peeled lemon was merely another unrealistic aspect of the Dutch still-life that charms the sight but denies the reality, and it is here that symbolism in Dutch still-lifes once again trumps reality.

“Trivial objects can make a perfect picture” notes E.H. Gombrich, picking a Willem Kalf still-life.6 Yet, the objects shown are neither trivial nor merely objects. They are a manifestation of an idea, of a symbol. They may have provided a way to study light and how it reflects off of objects, as Gombrich notes many artists probably liked to do, but a still-life encompasses more than that.

7 Fred Meijer of the Ashmolean Museum in Oxford, England, says that many Dutch painters themselves, like Samuel van Hoogstraten, figured that still-life painting was for the “foot soldiers” of the painting world- the mere pawns, not generals giving directions.

8 He states that while still-lifes are given names based on the objects within them, that they are never titled based on their iconographic importance.

9 This is true, de Heem never titles his paintings Still-life with Symbols of Mortality, but the well-read and image-rich Dutch culture has arguably scrapped that need to preface a painting by a descriptive title. The still-life still retains its importance regardless of how the artist titled the work.

In comparing my image created to a still-life, I ended up choosing Abraham van Beyeren’s Banquet Still-life with a Mouse. There are dishes full to bursting with grapes, a lobster gleaming a rich, red hue, and the impossibly peeled lemon dangling off the table- with a mouse, running across, threatening the purity and cleanliness of the image, foreshadowing. My image does not directly emulate van Beyeren, but it contains elements of his, with frosted fruit and fabric bunched. If I had spread all of the fruits and tulips across an enormous table and gathered many more Turkish scarves I might have been able to emulate van Beyeren more successfully, but in the end the lighting is similar with the help of computer technology and a successful timing of the day, and the shadowy texture is preserved.

The Dutch still-life reflects the moral and aesthetic values of the Dutch through the medium of paint. Many artists catered to the capitalist economy with reminders of mortality and sin, and while giving hints at reality. Although their actual creations are impossible to make, they give us a beautiful, warped glimpse into perspective and the stilleven as a symbol for the 17th century.

My re-creation of a 17th century Dutch stilleven.
Abraham van Beyeren, Banquet Still-life with a Mouse, 1667. 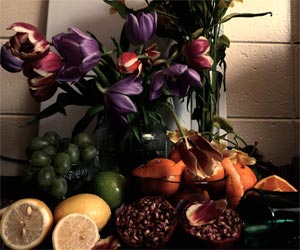 An attempt at recreating17th century stilleven 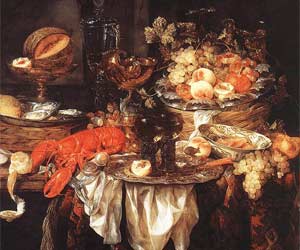 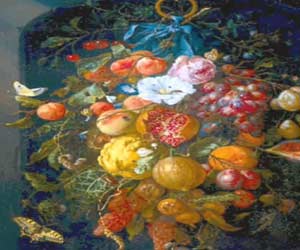