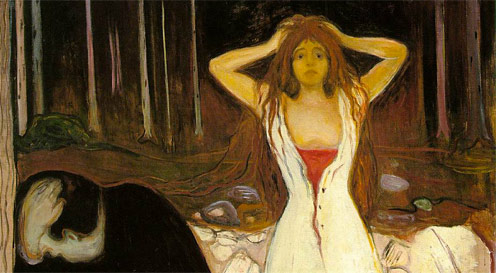 In retrospect Edvard Munch is one of the most influential artists that Scandinavia has ever produced. He is often mentioned in the context of postimpressionism. However, his real international breakthrough came at the turn of the last century in Germany where expressionism appeared much more appreciated than elsewhere in Europe at the time. He soon received patronage from privat collectors Max Linde, Gustav Schiefler, and Albert Kollmann as well as two permanent gallery contracts.

The Norwegian Munch is famous for many paintings but one in particular. It is a destiny that he shares with e.g. Leonardo da Vinci and his Mona Lisa or Vermeer and his girl with a pearl earring. It is as if time amplifies certain things or wear the same grooves deeper and deeper. It is as if stories told and retold end up being caricatures of themselves. Ironically, this article might not be an exception to this phenomenon. In the same way ‘The Scream’ has become the painting known the world over as Munch’s most striking, most reproduced and commercially exploited.

Many art historians have spent much energy on the psychological make up of the artist, extrapolating freely on the various traumas that he was subjected to throughout life. There was also a fair amount of material to take from forming a fertile ground for interpretation. However, It is not entirely inconceivable that Munch sometimes just painted for the sheer hell of it, and without importing much of himself.

Of course, it is not just a fair assumption that the more sinister experiences has had a great impact on his art, it is an absolute fact.

Munch more than anyone knew our days were numbered. He knew that the subjects he was painting had to be captured before they were gone, and that his large body of work was a testament to him wanting to express what needed to be said within a finite deadline.

As if being a doctor’s son did not make him acutely aware of life and its miseries such as the many Norwegian deaths because of tuberculosis, it did not help that his family proved to be mere mortals. Well perhaps more so than some families. When he was 5 his mother died. When he was 15 sister Sophie died, and 11 years later his father past away. The pain and bereavement must have been unbearable.

The impact on Munch’s art was a thematic coverage of the mortal, and include titles which directly translate into ‘Dead mother and child’, ‘Death in the Hospital Ward’ ‘At the death bed’, ‘Ill girl’, ‘The nurse’, and melancholy.

There were other cheerful titles attributed to the human conditions such as ‘Envy’, ‘Christmas at the Brothel’, ‘The lonely couple’, the ‘Murderer in the Alley’.

Add to this that he, like Strindberg, had an ambivalent relationship with women with occasional bouts of indignation and jealousy, which some could suggest are recurring themes.

Munch’s expressive art manifested themselves in numerous canvases, which his contemporaries would describe as somewhat sketchy. There was always evidence of fast confident brushwork. At the same time though, Edvard Munch worked the paintings up in thin layers of oil paint with copious amounts of turpentine and linseed oil. He would scratch off paint in hashed areas. Midway to late in Munch’s career, he began to draw up the outline of persons with thicker lines, drawing attention to the main actors almost as if they were cut outs, stuck unto the narrative with a glue stick.

His production was prolific indeed. Many of Munch’s works of art were oil-painted portraits, with a few of them being co missioned such as ‘Lady in blue’ (Mrs Barth), The four sons of Max Linde. Sister Inger Munch sat on several of the paintings.

Today Edvard’s production comprises of not only many oil paintings but also a number of water colours, etchings, lithography coal and pencil sketches. The famous ‘scream’ itself is a mix of oil, tempura and pastels on cardboard.

Art critics and the press

Munch gave rise to a number of scandals and public uproars. This was not so much because of his personal life, but because of his choice of motifs and painting technique. The contemporary art critics did not spare him with their scathing criticism. Accolades such as ‘shit smeared badly on canvas’ befell one of his exhibitions. A critic wryly said that this Munch-character produced work of such inferior quality that it deserved no commenting.

In 1886, upon seing the painting ‘The Ill Girl’, a Norwegian art critic from Intelligensbladet exclaimed:

That thing can’t be a hand, surely. It must be some mashed-up fishcake in a lobster soup

On a friendly recommendation, the then prestigious Art Council of Berlin (Verein Berliner Künstler) invited the rising comet to make a solo exhibition in the German capital city, but shut it down within days of opening.

The resentment towards Munch’s work was worse in his home country Norway. Nevertheless, the artist received a national grant from Norway to further his art by the local government choosing to fund a longer stay in Paris. Later he was knighted by the Norwegian King Olav. This was of course on the strength of Munch’s body of work. However, the choice to knight the artist came at a peculiar moment given the fact that Munch had suffered a mental breakdown and was hospitalised in Copenhagen at the time.

Munch ended up being well travelled. He stayed longer periods in Copenhagen, Berlin, and Paris and briefly visited numerous other cities within Europe to exhibit. Some of the paintings have recognisable backdrops such as Rue Lafayette in Paris or Carl Johan the main street of Oslo. Åsgårdstrand by the Southern Norwegian seaside is one of Munch’s favourite settings — not least because he had chosen it as his summer retreat. Some of his more harmonic and yet symbolic paintings originate from there, suggesting perhaps, that Åsgårdstrand was his true home.

Museums and collections, which own Munch art

Here is a non-exhaustive list over the places where you can enjoy seeing the art of Edvard Munch:
National Galerie, Berlin
Nasjonalgalleriet, Oslo
Munch Museum, Oslo
Rasmus Meyer Collection, Bergen 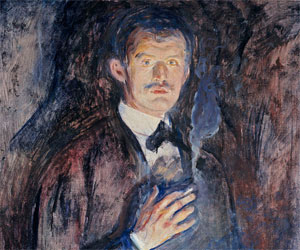