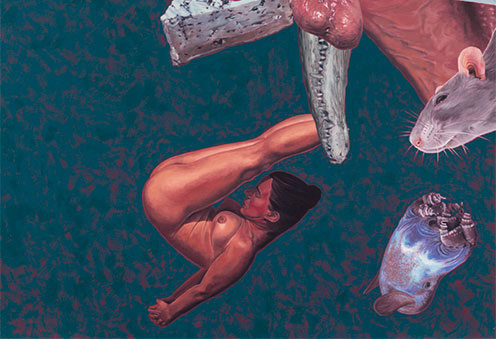 He is a surrealist artist-surgeon who retrieves objects from one sphere to combine them with objects from a completely different sphere – and “the models” can be collected from both high as low culture – resulting in these hybrid creatures that the world never ever has seen before.
Lisbeth Bonde, “Arcimboldo for the 21st Century”, Magasinet Kunst no. 4, 2013

It can be difficult to find your way in today’s metastasizing growth of artistic production, where it seems that everything has already been done, shown once, forgotten and then shown again. And so the phrase “anything goes” is perhaps an ideal rallying cry for the many strains of artistic nihilism that constantly threaten to spread throughout the rest of the Art World. Here at Gallery Poulsen, we have not yet succumbed to this anarchic malignancy, but we will make one exception – anything goes on the marvelous operating table of Alfred Steiner!

With his second solo show at Gallery Poulsen, titled “Anything goes”, Steiner shows us how disparate elements such as genitals and plastic buckets can be combined to create a wonderful, brilliant and original whole. The title of the show is taken from the Austrian philosopher of science Paul Feyerabend, who in the 1970s argued for an epistemological anarchy, where contradictory, incompatible and seemingly irrational theories are re-examined to shed new light on conventional wisdom. In fact, if you were to ask Feyerabend, there is no single method of rationality that governs the history of science. And this is precisely the point of view that the phrase “anything goes” represents.

No question, Steiner’s artistic work has been pieced together by the same anarchist concept, both in terms of motives and media. Steiner mixes random objects that include everything from flamingos, shotguns, genetalia, pharmaceuticals, nail polish to political portraits.

Each of the overall compositions is based on some pre-existing graphical source – whether a cartoon character, trademark or an art historical classic – which forms a template for Steiner’s unique and peculiar way of assembling images. Using this method, Steiner transforms recognizable images from everyday life and popular culture into novel creations, ripe with new meanings. The works unfold like welcoming tapetries, wowen with history, that we otherwise never would have thought of putting together – Vladimir Putin never looked so good chewing on the stem of a psilocybin mushroom.

Come see works based upon Francisco Goya’s Saturn devouring his son, the instagram logo, “Dee Dee” from Dexter’s Laboratory and Disney’s “Pinocchio”, in brand-new forms that are guaranteed to change your perception of both painting and the genre of portraiture. Steiner gives us canvas and paper, presidents and cartoons, seriousness and humor, testicles and hairdryers, and thereby brilliantly validates Feyerabend’s anti-dogma, “anything goes”!

“Anything goes” consists of two parts: five works on canvas and six watercolors on paper.

Alfred Steiner will travel all the way from New York to be present in the gallery both Friday May 8th and Saturday May 9th.