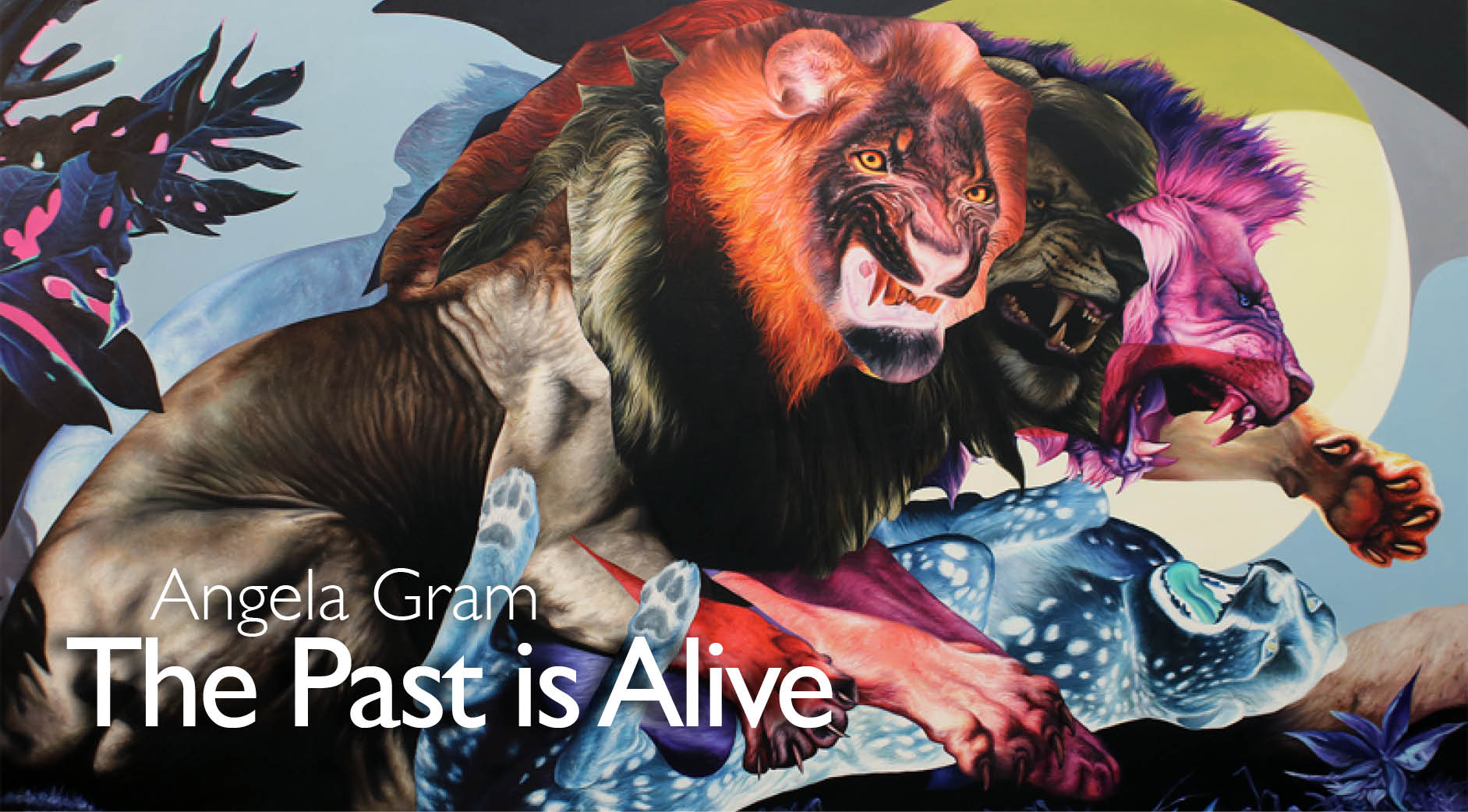 Tread cautiously as you enter the latest exhibition in the gallery, where heinous brutes and mischievous little creatures lurk behind the canvas and observe your every move. Angela Gram’s peculiar wilderness of distorted natural images makes us gaze erratically at every recognizable motif catching our eyes, only to shatter into a million pieces the next second.

”The Past is Alive” shows Angela Gram’s constant fascination with the monstrously surreal, expressed through her deconstructed animal kingdom, where every single wild creature is depicted as crumbled, irrational, chaotic beings, completely devoid of any identity in their fragmented state. She challenges our prevalent perception of the natural world by ripping it apart and leaving it up to our own consciousness to piece a new whole together, bit by bit of familiar elements.

But behind the figurative puzzles lies a much deeper narrative than what immediately meets the eye. In the largest work of the exhibition, ”He Who Greets With Fire”, we are allowed up close to the king of the jungle, who is flaring his prey in a frantic rage to secure his kingdom and banish anyone posing a threat to his position! Ntwadumela or He Who Greets With Fire was the name of a famous lion ruling the Serengeti land of Tanzania. Notoriously known as the ”hyena slayer” he possessed a furious aggression against rival hyena clans and would consistently destroy their matriarchal leaders.

The past comes to life right before our eyes and transposes us back to the classical vengeance tragedy, which has repeatedly played out time and time again, far back in history. From Shakespeare’s immortal tale of the young prince Hamlet, who was given the heavy burden of avenging his father’s murder, all the way back to the ancient Egyptian myth of the god Osiris, who is murdered by his brother Seth, while Horus, the rightful heir to the throne is sent away in exile. The tragedy is still repeating today, reviving the past through the classical power struggles that continue to play out in the political landscape where the top hierarchical positions are at stake and symbolic begrudging murder pervade the hidden agenda.

In Angela Gram’s works, Ntwadumela is a powerful symbol of the animal embodying human values of fearlessness and power, and stand as a majestic and untamed example of the brutish instincts embedded in our collective psyche. The captured cheetah represents that which is fleeting and fragile in man.

Each work is composed as a collage of deconstructed fragments that reflect the irreconcilable tension between the reality of wild animals and our modern romantic perceptions of nature.  Through their cultural and physical disappearance, animals have come to exist in the contemporary imagination where nature retains its value as a creative force and continues to symbolically narrate the human condition.

Do not hesitate to sneak inside Angela Gram’s volatile nature reserve, where the past is alive and kicking! But beware of the smoldering ferocity that will overpower anyone who dares to poke the beast!

The exhibition shows 13 exuberantly intense oil paintings Angela Gram will be present for the opening and available for interviews. Contact the gallery at info@gallerypoulsen.com or phone + 45 33 33 93 96 for further information