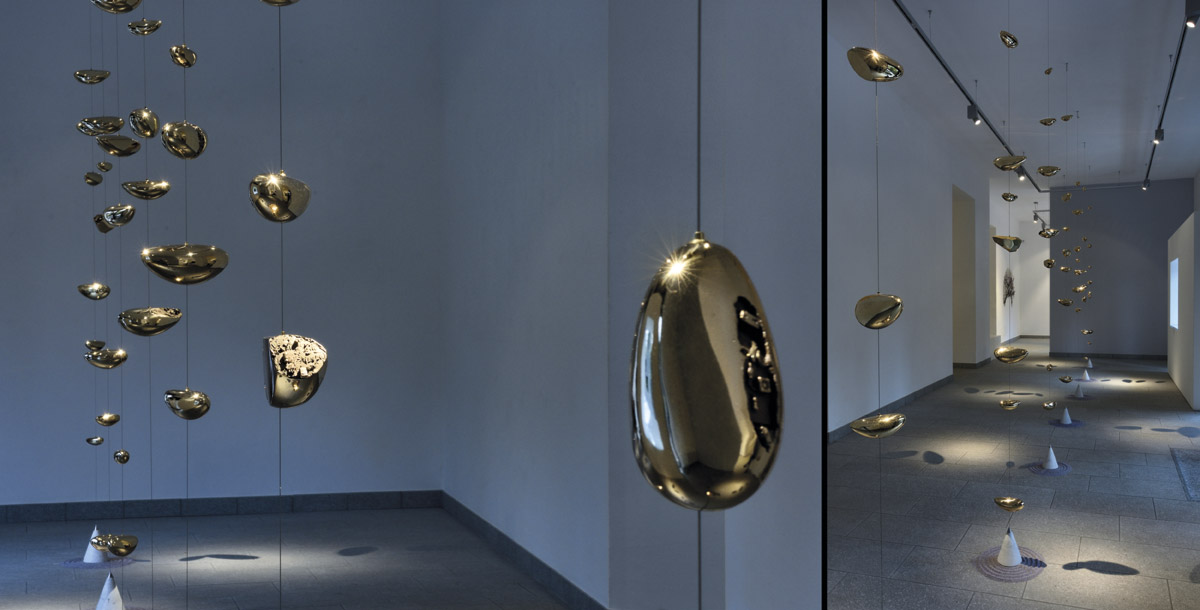 Two dissimilar artists, yet united by the same inner spirituality, flank within the rooms of the PUNTO SULL’ARTE Gallery in Varese – Casbeno (OPENING ON SATURDAY, MAY 6, from 6 to 9 pm): the Japanese KYOJI NAGATANI, who selected bronze as his main way of expression, and ANNALÙ, a young Venetian artist who gifted resins with a new aspect and a new voice. If the first prefers the compact impenetrability of metal, the second favours the transparency of synthetic materials; whether he uses an essential and minimalist language, she elevates her song through full, embracing, even baroque tones; if one plays with reflected light and dark shadows, the other one is leaded by a wild palette. However, the research for the truth sealed within nature underlies all the works by both artists and generates secret dialogues between the seven virtues narrated by Nagatani’s Pietre Oniriche, hanging from the ceiling in elegant rows and reinterpreted like primordial shapes of Renaissance grace, and the fractals hiding behind crochets by Annalù; between the whispering of the matter teeming under the shiny broken surface of the bronze and the vibrating butterflies swarming within the Dreamcatchers; between the arduous rocky spurs upon which secret, yet penetrable, abodes perch on and those Fukinagashi (an homage to oriental culture by the Italian artist) shaken by the wind upon their floating islands like sails within a storm.

ANNALÙ: Born in San Donà di Piave (VE) in 1976. In 1999 she graduated from the Academy of Fine Arts in Venice. Since 2001 her works have been shown in numerous solo and collective exhibits in Italy and abroad (Hong Kong, Los Angeles, Naples in Florida, Bologna e San Giminiano). In 2001 and 2011 she participates at Venice Biennale and in 2017 at Scope New York. She has won several awards and mentions (Premio Arte Laguna 2007 e 2008, Premio Pagine Bianche 2006, Premio Stonefly per l’Arte Contemporanea 2008, Premio Ora 2011, Premio Opera le vie dell’Acqua 2012, Premio Zaha Hadid 2016). Her works have been shown in a number of Italian and foreign museums and belong in public and private collections in Italy and abroad. She lives and works in San Donà di Piave (VE).

KYOJI NAGATANI: Born in Tokyo (Japan) in 1950. He graduated at the Arts University in Tokyo and was awarded with a degree from the Research Institute of the State University for the Arts in Tokyo. In 1976 he graduated in bronze casting at the Tokyo University for the Arts. After that, he won a scholarship from the Italian Government and graduated from the Fine Arts Academy in Brera, Milan in 1984. Among his main works there are the Monument for the Communal Theatre of Hachioji in Tokyo, the sculpture for the Open Museum of Usukushi-ga-hara of Nagano and three monuments for the Public Gardens of Yoshikawa City. He lives and works between Tokyo and Milan.