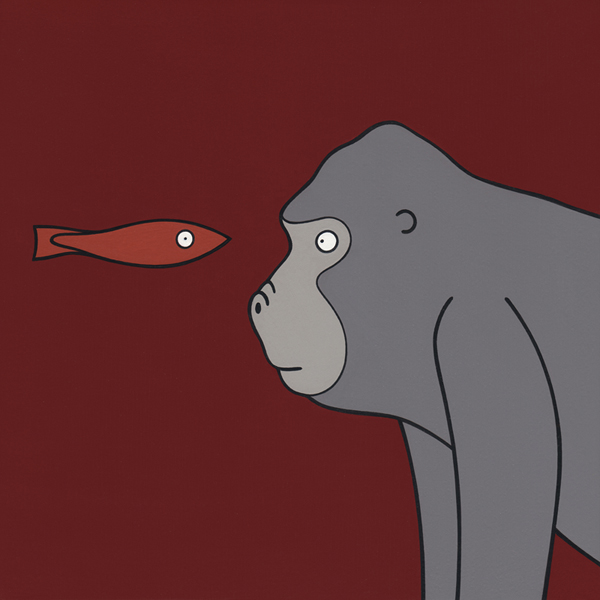 Two years after their last exhibition together in Varese, MASSIMO CACCIA and ALICE ZANIN are once again together with their works centred upon animals, at the Galleria PUNTO SULL’ARTE in Varese – Opening on SATURDAY 7th MAY from 6pm to 9pm.
Born along with a contemporary combined exhibition by the two artists – held in Biella, at Palazzo Ferrero – this project refers to our relationship to animals. These paintings are not so different to those of human beings since they represent our fears, anxieties and phobias. This comes out well in the works of the two artists even if portrayed in different themes and languages, yet united by the choice of a pop style and a strong formal stylization.
Zain’s papier-mâché giraffes, zebras, and greyhounds tell about a stylised reality, which almost reaches self-annihilation by turning into a gentle lightness. A circus atmosphere emerges through these animals with stretched muzzles; tapered paws often raised in the air, and improvise dances all within delicate and conceptual installations. The animals painted by Caccia offer enjoyable glimpses of everyday life with immediate graphics, marked by powerful hues. They mirror the frustrations, which sprinkle our existence seized within emblematic situations, during symbolical dialogues with incongruous objects.

MASSIMO CACCIA was born in 1970 in Desio (Milan). He attended the Accademia di Brera, graduating in Painting in 1992. Mainly focused upon this technique, his works were chosen for various solo and group exhibitions and Art Fairs. His paintings portray animals in strange situations, set up with everyday objects against uniform and, often monochromatic backgrounds. Apart from painting, he creates titles for short movies, sceneries and marionettes. In 2001, he made a cartoon for the Christmas advertising campaign of TELE+. In 2007, he created the graphic novel Deep Sleep (Grrrzetic Editrice), and in 2009, he started working for the Topipittori Company, which led to the publication of three illustrated books. In 2012, the Miroglio TEXTILE group for the project “Metri d’Arte” chose him. He made artistic fabrics in collaboration with a team of designers, which were then exposed in Paris at the Premiere Vision. He cooperates with the Corriere della Sera newspaper by creating drawings for the Sunday insert of La Lettura. In his spare time, he transforms everyday objects (tables, chairs, sofas) into animals. He lives and works in Vigevano (Pavia).

ALICE ZANIN was born in 1987 in Piacenza. Self-taught artist, she experienced various means of expression amongst which painting. As of the beginning of 2012, she focused upon papier-mâché. During the first part of her production (the series “verba volant scripta…”), she developed, by using animal speech, an ironic dialogue illustrating the evanescent, temporary and changing link with the human values of oral tradition. She was able to reach results that are even more refined by removing texts from papers, in order to obtain lighter surfaces, and create chromatic counterparts among different kinds of paper. Nowadays her work – even though still sculptural – is oriented towards installations, which create, between her works and objects, a dialogue focused upon inconsistency and association of ideas. The almost immediate choice of the objects often lead to a misinterpretation of their common function, thus generating awkwardness and irony between them and animals. She took part in solo and group exhibitions and art fairs in Italy. Her works belong to private collections in Italy, Austria and Venezuela. She lives and works in Podenzano (Piacenza).