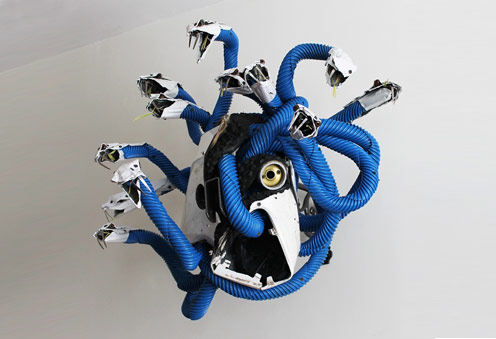 This year the International Meeting of Contemporary Art “Art-Athina 2015” celebrates its 20th edition!

The greatest art event in Greece is to open at the Faliro Pavilion (Taekwondo Stadium) on Thursday 4 June and will run through Sunday 7 June. Instituted by the Hellenic Art Galleries Association in 1993, “Art-Athina” is organised for the third consecutive time by EuroΜare. The exhibition is under the auspices of the Ministry of Culture, Education & Religious Affairs and the Municipality of Athens.

The 20th “Art Athina” confirms its endurance, firmly established in the art-loving public’s collective conscience, as one of the highly anticipated as well as most influential events in the field of contemporary art.

At the core of the show are the participating Greek and foreign art galleries whose presence reflects the artistic orientation of our time; they present to art lovers and the general public a selection of the current artistic production and highlight the latest trends and preoccupations that prevail on the international art scene. Moreover, cultural institutions like museums, foundations, art publishers and media add to a comprehensive picture of the artistic landscape of our time. It is worth noting the event’s constantly increasing visitorship, with last year’s “Art-Athina” attracting 35,000 visitors (compared to 18,000 in previous years). The aim for this year is for the number of visitors to exceed the 40,000 mark.

The anniversary event of “Art-Athina 2015” comes at a time of strong cultural activity in our city. The opening of the National Museum of Contemporary Art, the Stavros Niarchos Foundation Cultural Center (SNFCC), the Basil & Elise Goulandris Foundation’s Museum of Contemporary Art and a string of collaborations with foreign institutions as a result of Documenta 14: “Learning from Athens” –all these events mark the beginning of a new age in the cultural development of Athens at all levels.

The Parallel Programme of “Art-Athina 2015” will centre on Greece as the crossroads that links Europe, the Balkans, the Black Sea and the Middle East — a location of great importance on many levels, including that of contemporary art. Specifically, “Platforms@Art-Athina 2015”, headed by artist and curator Artemis Potamianou, will be attended by artist platforms from 16 countries. The programme aims to chart the artistic actions produced by collective initiatives of artists who decide to join forces in seeking solutions to art matters through what is known as platforms.

The exhibition “Art-Athina Contemporaries”, curated this year by Christoforos Marinos, will attempt to document some contemporary artistic approaches to enduring social concerns. Often resorting to alchemic means, the 39 artists in the show explore such key needs of our time as the stability of place and the potential for reorganising the world. The “Honoured Collector” of “Art-Athina 2015” is Mr Dakis Joannou, who presents “Breath”, the exquisite installation by Nikos Navridis which was featured in the Venive Biennale of 2005.

This year’s VIP programme is also outstanding, attended by major figures from the art world, collectors and art lovers. Special emphasis is always placed on the educational aspect of “Art-Athina”. A special anniversary programme for the twentieth year has been designed for young visitorsto discover new skills and expressions and activate their artistic perception in a dedicated interactive art space within the event.

The Athens art-fair, one of Europe’s oldest, continues on its course, justifying its history and setting new ambitious and topical objectives. Now in its twentieth year, “Art-Athina”, the most important artistic event in the country, has managed to consolidate its role as a major regional show in Europe and aspires to establish itself as a historical yet current event of the highest level.