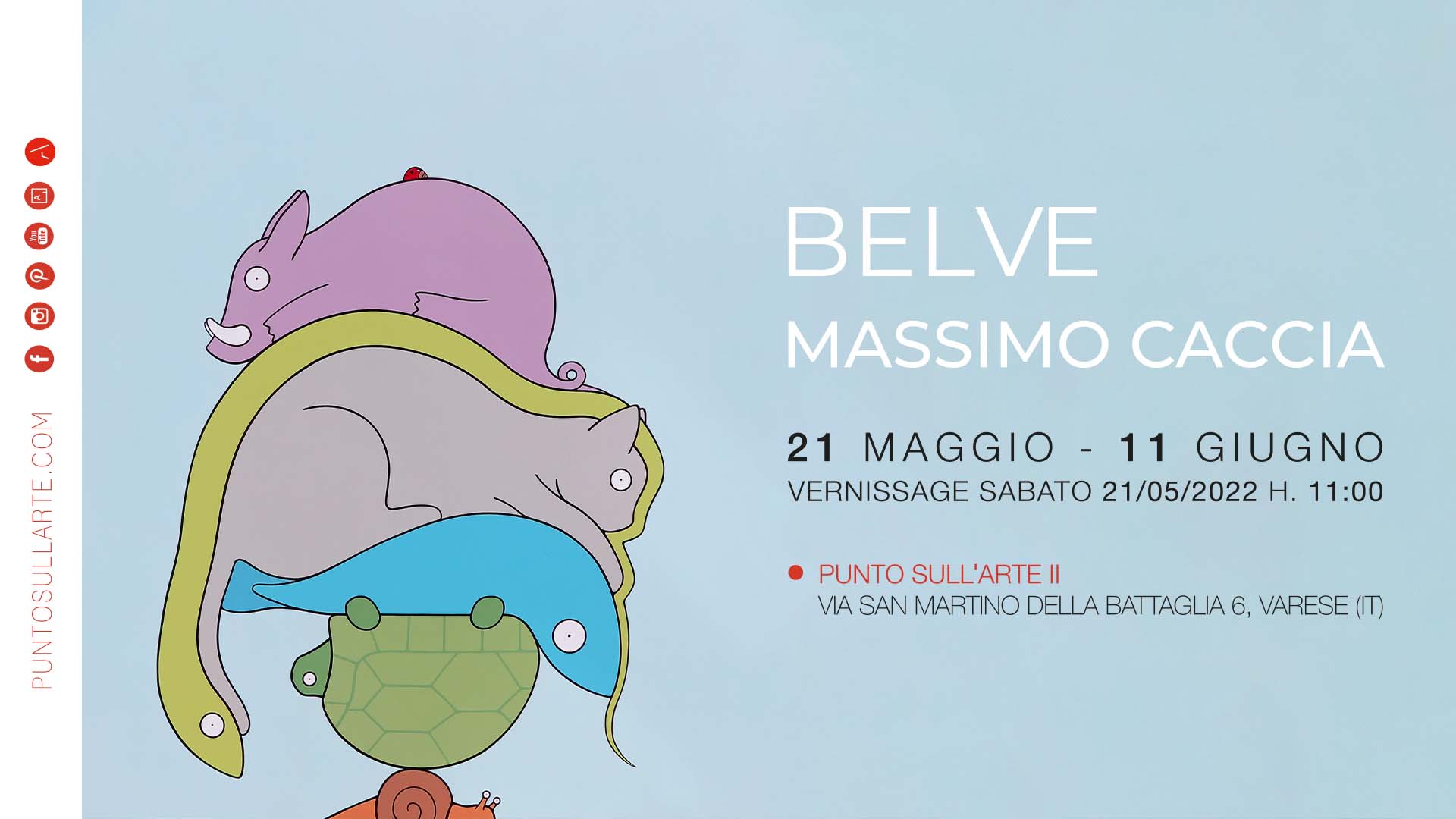 Discover a beastly exhibition at PUNTO SULL’ARTE’s second Gallery, in the historical centre of Varese (Via San Martino della Battaglia 6). Opening reception on Saturday, May 21 at 11 am. A new solo show of the renowned MASSIMO CACCIA, painter and illustrator of many colourful but rather tragicomic stories. The protagonists of his paintings are disoriented animals, with big eyes, often astonished, sometimes unlucky.  “Belve”, the title chosen for the exhibition, is actually a play on meanings. The animals that inhabit the dazzling scenes of Massimo Caccia do not have a frightening aspect: even those that in nature we know as ferocious and dangerous, in these works generate in the viewers empathy and tenderness, at the point that they seem much more similar to us, human beings, than what we believe. Artist with great narrative ability, in his new solo show in Varese, Caccia presents previously unexhibited works made of enamel colours on board together with original illustrations and sketches created for the well-known supplement of Corriere della Sera “laLettura”, with which he has collaborated since 2013. Works in which the form of his story has always been deeply linked with great writing and journalism.  The Gallery will also present some of the latest challenges of the artist, who is able to go beyond his limits and his comfort zone: works from the series Giorni Bestiali, a project of 365 paintings on paper, size 23×23 cm, made during 2018, one for each day of the year; and again, very recent and unexhibited works, new also for the working method and genesis, born as a free inspiration of the painter who has started from the “container”, some frames found by chance in the markets. In Massimo Caccia’s paintings – among a pink piggy under a hammer, a dog with an unusual mask and a little fish floating in a glass that floats in the middle of the sea – the viewers find themselves, even if they do not see each other. Going with clean traits beyond every limit of format and opening up in front of our eyes a universe full of adventures, Massimo Caccia tells us stories that are sometimes poetic, other times not to be believed … beastly stories, indeed.

MASSIMO CACCIA was born in Desio (MB) in 1970. He draws, illustrates and paints. He tells suspended stories where the protagonists are animals. Mainly devoted to painting, he exhibits in solo and group shows and takes part in art fairs throughout Italy. Recent exhibitions include Giorni Bestiali (catalogue of Edizioni della Galleria l’Affiche, text by Guido Scarabottolo), composed of 365 paintings on paper made one per day, throughout 2018. He has published five books with the publishing house Topipittori and since 2013 he has collaborated with Corriere Della Seraillustrating articles and stories for the supplement laLettura. In 2021 his works were chosen for the tenth edition of the open-air exhibition Affiche curated by the Tapirulan Association in Cremona. Recently he has coloured the comic book Tutta colpa dei supereroi by David Bacter, that will come out in September 2022 (Edizioni In your face comix). He lives and works in Vigevano (PV).