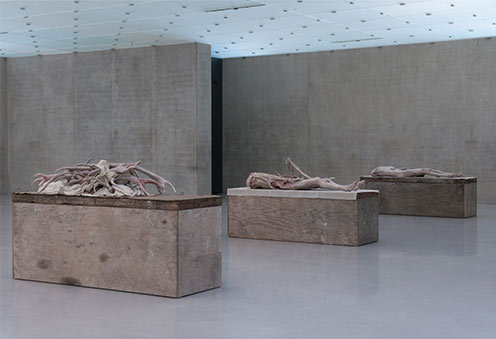 Sculptures from the series Liggende and Actaeon and drawings from the series Romeu »My Deer« complement and reinforce each other on the first floor of Kunsthaus Bregenz. According to Greek mythology, Actaeon came across the goddess Diana bathing. As a punishment, Diana transformed him into a deer which was subsequently torn apart by his own dogs. Together with the dancer Romeu Runa, De Bruyckere has developed drawings and a dance performance addressing this subject for Kunsthaus Bregenz. For Actaeon, wax antlers bundled in piles lie on wooden plinths, as do the sculptures Liggende I and Liggende II, modeled on human bodies, evoking pathology tables, victims, or the body of Christ.

The second floor, dominated by the large-scale work Kreupelhout|Cripplewood which debuted at the Belgian Pavilion of the Biennale di Venezia 2013, was inspired by the crown of a gigantic elm, felled during a storm. Wounds, scars, and arteries translucent beneath the bark, transform the tree into a being between human, animal, and plant.

For the third floor the artist has produced a completely new group of works of stacked animal hides from wax, polyester, and iron. This work was preceded by the artist’s intense observations of the processing of animal hides in a Brussels slaughterhouse. De Bruyckere has concurrently developed a stage set for the piece Penthesilea, a composition by Pascal Dusapin based on Heinrich von Kleist, for the La Monnaie opera house in Brussels.

Tuesday to Sunday, 10am to 6pm