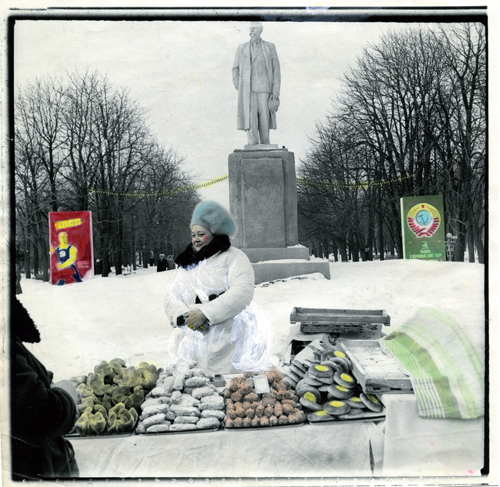 Boris Mikhailov has been chosen to receive the 2015 Goslar Kaiserring, one of the most prestigious of contemporary art prizes. The news was announced in January by the Mayor of Goslar, Oliver Junk, at the traditional New Year reception in the Kaiserpfalz. The 76-yearold Ukrainian photographer, who lives in Berlin and Kharkiv/Ukraine, is one of the most highly regarded artists on the contemporary photographic scene. Mikhailov will receive the Kaiserring in Goslar on 10 October 2015. In their citation, the Kaiserring jury described the artist without a doubt as “one of the
most important chroniclers of Soviet and post-Soviet society. Born in Ukraine in 1938, his international reputation is based on his moving photographs of homeless people in his native city of Kharkiv. Trained as an engineer, Boris Mikhailov began in the 1960s to engage in photography as a hobby, trying out its technical potential and experimenting in a variety of
ways with the pictorial material, out of which he created new and unusual forms of depiction. He used techniques such as superimposition, post-colouring, defamiliarization, humorously critical combinations of text and picture deriving from his own and found material to record,and comment on, everyday life and repression in the then Soviet Union. Superficially he
employed an aesthetic that was loyal to the regime, but at the same time it was ironically subverted.” Boris Mikhailov

Boris Mikhailov lives and works in Kharkiv and Berlin. After graduating, he worked as an engineer in a missile construction factory. This “boring and routine” job did not satisfy him. He decided to make a film about the history of the factory, where he worked, and which was also formerly a colony for homeless children who lived and worked there. At the same time, Mikhailov also began taking photographs and devoting much of his free time to photography. The ordinary citizen and his life was the main subject of his photographs. After difficulties with the KGB and the loss of his job, his photographs became more socially oriented and he began to criticize the regime. In his main photographic series, Mikhailov addresses social themes, using concrete examples to show the state of society and changes brought on by the dissolution of the USSR. From the from the late 80s he began to exhibit in the West and soon received recognition from the international art community. Mikhailov has been awarded numerous international photography prizes. He has had solo
exhibitions at major art institutions in Europe and in the United States. His works are in the collections of the Metropolitan Museum and the Museum of Modern Art, New York; the Tate Modern and the Victoria and Albert Museum, London; the Stedeljik Museum, Amsterdam;
Centre Georges Pompidou, Paris; the Foto Museum Winterthur; Kunstmuseum Basel; Berlinische Galerie, Berlin; Sprengel Museum, Hanover; Neue Pinakothek, Munich, Ludwig Museum, Cologne, Albertina Museum, Vienna. (from the press release of the City of Goslar)