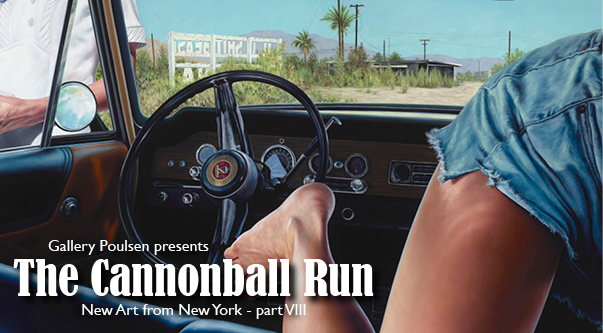 A hot summer day in June 1981 on a desert highway in Connecticut – thus was the starting point for a blazing cross-country car race in breakneck speed. Anything goes, when Burt Reynolds and his star-studded team embark on their madcap adventure. One by one, they set up by the starting line with one goal in mind – to cross the finish line in Los Angeles, whatever the cost!

Inspired by the film classic “The Cannonball Run” with an all-star cast including Burt Reynolds, Roger Moore, Farah Fawcett, Dean Martin and Sammy Davis Jr., this summer Gallery Poulsen has summoned our own start-studded team to Copenhagen’s Brown Meatpacking District.

Equipped with meticulous brush strokes and eccentric tales on lavish canvases, an equally blazing race takes its starting point in New York. With one foot firmly placed on the accelerator, our formidable artist team has competed against time in order to complete a bold and adventurous race across the Atlantic.

Nothing could hold them back as they blasted all boundaries along the way in their pursuit to deliver the superbly most magnificent masterpieces to Copenhagen.