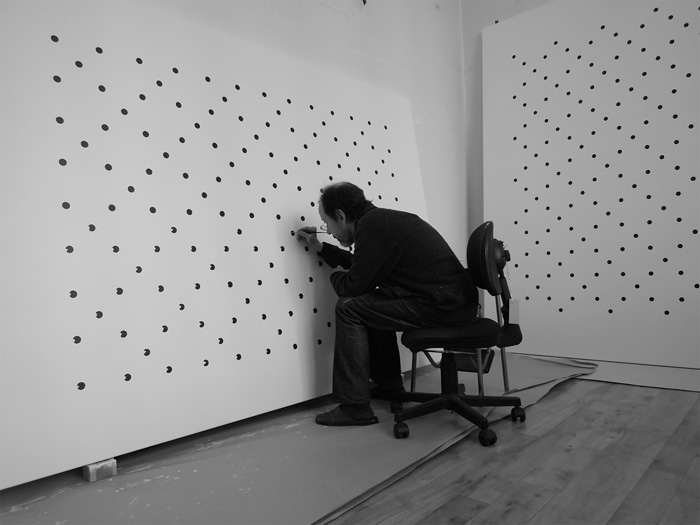 Christian Denzler, who was born in 1966, lives and works in Bern and Brussels. He draws, paints and creates installations and objects, but ever so often he also writes poems, prose and texts ac-companying the works of artist friends.

The body is the theme that threads its way through all his works. His early paintings depict stylised, mainly female shapes created with a few, precise lines, often spreading across several canvases. When he moved to Brussels, he gradually moved away from a rather geometric aesthetics and dis-covered the finely dotted line instead. Using this drawing method, he created highly detailed im-ages of navels and nipples, where there is only the slightest suggestion of a shape, the pencil seem-ingly caressing the paper like skin.

After this phase, Denzler set out on a rigorous analysis of the portrait, using photographs he found on flea-markets of long dead, anonymous people as models for his incredibly meticulous draw-ings. Here, the lines are so fine and the transitions from light to dark so subtle that one can never be sure whether the figures are in the process of appearing or disappearing. It is exactly this hard-to-define, elusive realm, this balance between condensing and dissolution, this magic moment of at-traction and repulsion the artist is interested in.

The works produced for our exhibition allow a perfect overview of Christian Denzler’s oeuvre. On display are new works based on photographic models, as well as large and medium sized groups in acrylics and coloured pencil oscillating between figuration and abstraction, which he combines with astonishing objects. The exhibition is accompanied by a publication of short, lyric texts pro-duced over the last twenty years, which he had shown in previous exhibitions in the form of lin-guistic objects or in close dialogue with his drawings and paintings.