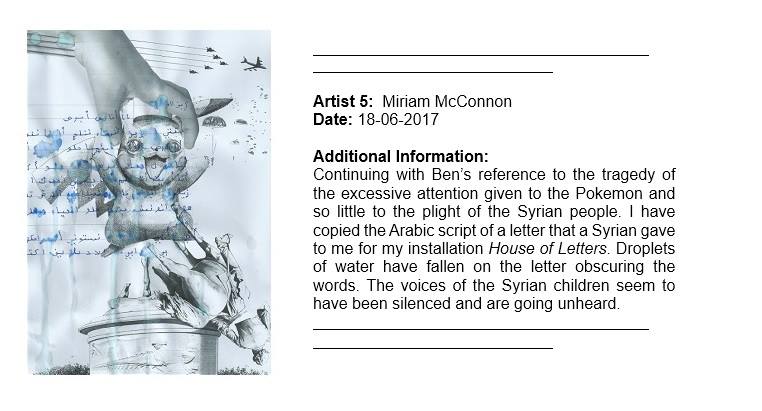 We would like to invite you to attend a panel discussion with some of the artists involved in the Concerning the Other project.

We thought that it would be a good idea to have a panel discussion with some of the artists to further explore the various elements of the project, i.e how the artists dealt with each other’s work, how they found the process of having their work altered (and sometimes, destroyed), how the public engaged with the process week by week, how people responded to the final works, what effect (if any) the works had, and many more questions that have arisen since the beginning of the project.

It promises to be a very interesting evening as they will be talking about their experience during the project and answering any questions you might have. The event will be chaired by Michael Coyne*

Concerning the Other involved ten contemporary artists working together on one hundred pieces of art, to promote diversity and concern for minorities in these days of mounting racism and intolerance.

The final ten artworks along with a selected number of ‘in-between’ prints can now be seen in an exhibition at the Olivier Cornet Gallery in Great Denmark Street (next door to Belvedere College). The show, which will end on Sunday, the 8th of October, was curated by Olivier Cornet, Claire Halpin and Eoin Mac Lochlainn

*The panel talk will be chaired by Michael Coyne Michael Coyne who is currently doing an MA in Visual and Critical Studies with the Dublin School of Creative Arts at DIT. Visual and Critical Studies examines the theory and criticism of contemporary visual culture or the history of art and design. Placing particular emphasis on practice that is engaged with critical and historical debate.

Michael has selected the Concerning the Other project for the focus of his Master’s thesis which will consist of a comparative analysis of exhibitions focusing on themes of migration, refugees, conflict, otherness and representation politics. Primary research fields examined include exhibitions, museum studies and the representation of certain marginalised groups.

Looking forward to seeing you