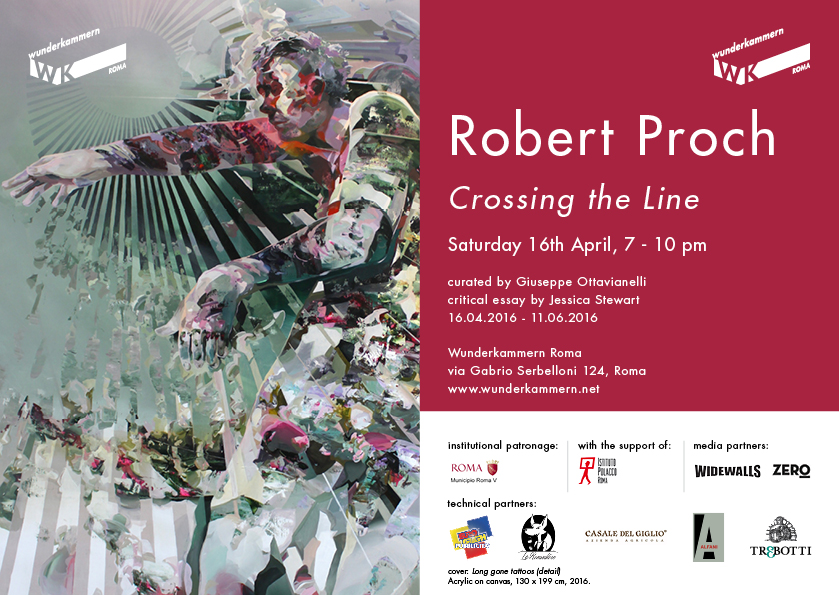 Institutional patronage: Municipio Roma 5
with the support of the Polish Institute of Rome

Robert Proch (born in 1986 in Bydgoszcz, Poland) is undoubtedly one the most promising talents of the emerging Polish contemporary art scene. With a degree from the Academy of Fine Arts in Poznan, city where he lives and works, he has already exhibited with solo shows in key art galleries such as Lazarides (London, 2014), Openspace (Paris, 2013 and in 2015 at the Bastille Design Center) and The Outsiders (Newcastle, 2012). Proch has also participated in group shows at the Puteaux City Hall gallery (Puteaux, France, 2014), Whitewalls (San Francisco, 2013), and Thinkspace (Los Angeles, 2012).

The art of Robert Proch is an experiment of the imagination. He creates impressive visions, half-way between abstraction and figuration. The artist draws inspiration from daily life events and the urban environment that he reduces to their essential elements to create a geometric vision in which the human figure is suspended in a complex and fragmented world. Like in a deconstructed and metaphorical architecture, the final visual appearance of his images is characterized by an inspiring unpredictability and a controlled chaos. Inside these fictional landscapes he creates imaginary narratives: often isolated figures, or estranged from each other, in a precarious balance between what could or would never happen.

Despite their technological and instantaneous aspect, Robert Proch doesn’t use photography or digital production to create his images. He takes inspiration from direct life experiences, which he then reassembles through his memories and combines with free and spontaneous creation on the canvas or wall. This spontaneity is, as the artist states, what makes the process of creating so interesting. Time is an important aspect in Proch’s work. Nevertheless, in spite of the great aesthetic dynamism, Proch’s figures seem paralyzed, suspended in an uncertain moment and space.

Modern human condition, inaction and freedom are the concepts that will be explored in Robert Proch’s exhibition at Wunderkammern, "Crossing the Line". According to the artist, people are influenced by numerous factors that condition their lives and actions: everyday needs, repeated daily gestures or pressures of the majority. Freedom seems an utopian ideal, still we always seek for it. But sometimes a breaking point happens in which we are able to see clearly and take a free action, take a step further; we cross the line. However not taking this step can lead to a frustration that can degenerate in destructive tendencies. The artist portrays imagined personalities in this critical state of mind, on the thin line that separates the two conditions.

For “Crossing the Line” Robert Proch will present new artworks on canvas and drawings, all created specifically for the show at Wunderkammern. The artist will be present at the opening.