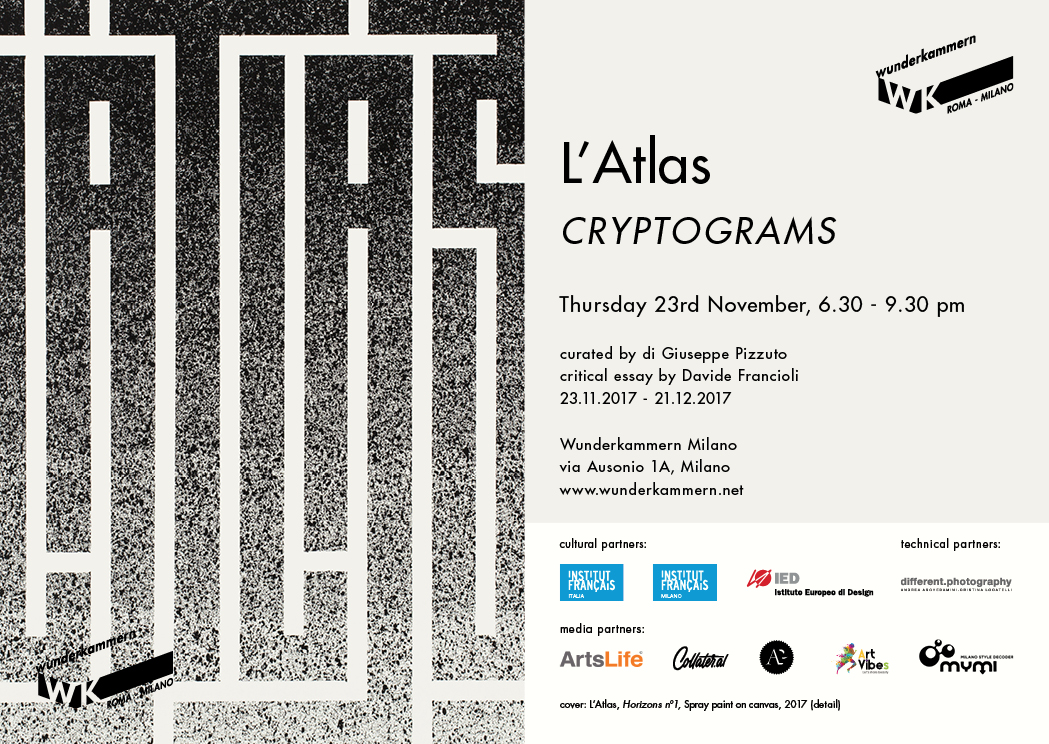 Wunderkammern is glad to present in Milan a new show by French artist L’Atlas, CRYPTOGRAMS.

L’Atlas (France, 1978) lives and works in Paris. He is one of the most internationally recognized artists in Urban Art, he exhibited in important institutions in Paris such as Fondation Cartier (2009), Grand Palais (2009), Palais de Tokyo (2007) and Centre Pompidou (2004). In 2017 the artist has collaborated with Guerlain exhibiting at La Maison Guerlain, also in Paris.

L’Atlas started his artistic path by painting in the streets of Paris in the ‘90s. His strong interest for the techniques and the history of calligraphy later brought him to study Chinese, Arabic and Hebrew calligraphy in different countries around the world. He created his own typography and based his work on letters and forms, always favouring black and white for their capacity to create an optical vibration while observing the artwork. In his artistic production it is possible to find a combination and a synthesis of elements deriving from Graffiti, Geometric Abstraction, Optical Art and Kinetic Art.

“[…] life is energy and also calligraphy is energy, painting is the translation of pure energy” – L’Atlas

After the exhibition Transversal, opened in 2014 at the Rome gallery, Wunderkammern presents in Milan a new solo show by L’Atlas: CRYPTOGRAMS. A cryptogram is a ciphered or coded text, whose comprehension is not immediately accessible but needs instead a proper interpretation and translation. The artist’s cryptograms appear as abstract labyrinths, concealing letters within their geometry and lines. While calligraphy mixes with kinetic art, the artworks play with the viewer’s perception and they explore the line between what is visible and what is apparently invisible.

L’Atlas has produced a new series of canvases of medium size specifically for the exhibition at Wunderkammern; the majority of them has been created using white, black or different tonalities of grey spray paint. However, the artist has also introduced in two artworks a colour which becomes fluorescent under black light. CRYPTOGRAMS will extend its opening hours for the event “GALLERIE APERTE” (open galleries), organised by the 5VIE Art+Design association and patronized by the Municipality of Milan, which will be on Thursday 30 November from 6 to 10 pm.