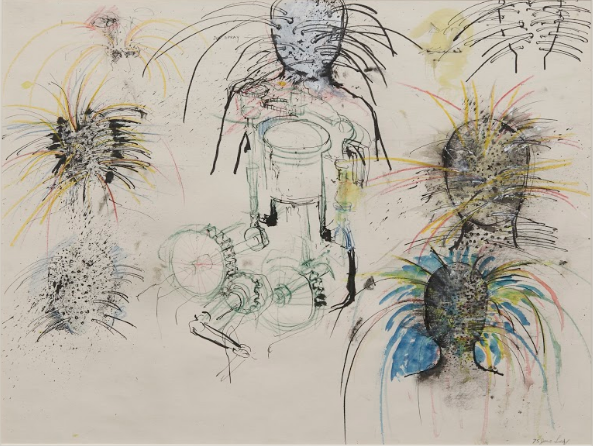 Dark Laughter an exhibition curated by acclaimed American poet and art critic by Barry Schwabsky presents four New York-based artists, Genesis Belanger, Ellen Berkenblit, June Leaf, and Emily Mae Smith. The four artists are brought together for their use of imagery that might at first seem to have a reassuring familiarity, but on second viewing reveals a current of dark humour and a sometimes sardonic, acerbic view of the world.

June Leaf (b. 1929), part of the original Chicago “Monster Roster”—is one of the unheralded visionaries of contemporary painting and sculpture. In Dark Laughter her canvas The Painters, ca. 1975-80, presents its protagonists as a pair of mounted Don Quixotes doing battle with their brushes.

Ellen Berkenblit’s (b. 1958) paintings place her recurrent snub-nosed pictorial alter ego in an off-balance kaleidoscopically-shifting world of abstract shapes, domestic and wild beasts, and all the familiar trappings of daily life.

Emily Mae Smith (b. 1979) also uses a recurrent avatar in her stylistically diverse paintings – a broom not unlike the rebellious one featured in Disney’s Fantasia and uses cartoonish hair, mouths, and buttocks to create satirical portraits of contemporary political figures.

The ceramic or concrete sculptures of Genesis Belanger (b. 1978) are whimsical remakes of ordinary things that conjure an eerie alternative world in which objects might be alive including: a handbag with a milkshake inside, a foot with a dollop of whipped cream and a cherry on the big toe, and a rather alarming electrical outlet with a knife stuck into it.