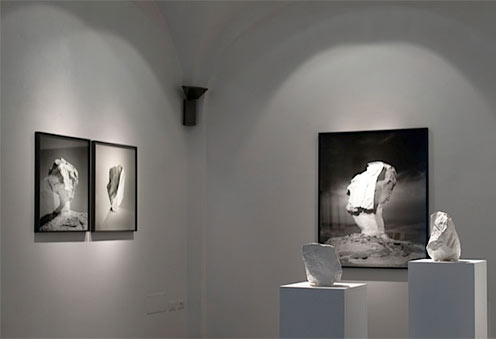 The Galleria Passaggi is pleased to present the first solo exhibition in Italy of the young English artist Darren Harvey-Regan.

Harvey-Regan graduated at the Royal College of Art in London and in the space of a few years has caught the attention of the public and critics. His work has appeared in exhibitions and publications internationally and is part of the permanent photography collection at the Victoria and Albert Museum, London.

Blurring the boundaries between photography and sculpture, Harvey-Regan’s work investigates the relationship between the object and its representation. At the center of his research are continual changes of meaning and definition between a subject – the thing in the world, an image – its photographic representation, and the photographic object – the material photograph itself. “It’s a means of transposing material into other material, adding new meaning or thoughts in the process”, maintains the artist. “I think photographing materials is a way to consider the means of creating meaning, and it’s a tactile process with which I feel involved. Touching and moving and making are my engagement with the world and my art.”

The Erratics is the title of the solo exhibition that Darren Harvey-Regan presents at Galleria Passaggi. The exhibition is made up of a group of unpublished photographic works: The Erratics (exposure) – show natural rock formations in the desert eroded by the wind and sand – and The Erratics (wrest), photographs that depict a series of sculptures made by the artist himself, using chalk collected from rockfalls along the South Coast of England. In geology the term “erratics” indicates those rocks carried down to the valley floor by a glacier. Once the ice retires these great rocky formations, far from their place of origin, are found to occupy an unusual position in the middle of the plain. In the artist’s work the term refers to a double displacement, both that brought about by the photographic act of lifting something from its environment and by removing chalk from the rockfalls. “Erratics” Harvey-Regan tells us is a term that comes from the Latin “errare” whose meanings include “to wonder without a goal” and “deviate from the true”. They are suggestions that in an indirect way refer to some motivations that form the basis of the project, conceived during a phase of creative impasse in which the artist felt the need to confront the abstract dimension, finding a source of inspiration in Wilhelm Worringer’s famous essay of 1906 Abstraction and Empathy.

According to Worringer abstraction and empathy represent two regulatory ideas that imply different forms of artistic intent and figuration: empathy responds to the need to connect to the visible world identifying with it and representing it, whereas the impulse towards abstraction is symptomatic of a relationship more detached from the world, of the need to distil lines, shapes and colours from the chaos of phenomenal appearances. Harvey-Regan explains that the reading of Worringer’s essay is closely linked to the evolution of his photographic practice. “I felt as if I reached a form of paralysis, any subject, any object that might be photographed seemed too laden with form, too connected to a ceaseless stream of associations and interpretations. The desire to be freed from this weight of meaning yet somehow be true to the essence of photography had resulted in increasingly restrictive months in the studio photographing ever simpler blocks and lines, my own urge to abstraction in the face of the world’s overwhelming complexity.”
To break this form of stalemate and satisfy his need for relationship and direct contact with natural forms, the artist went to Egypt, where he took a series of photographs of chalky monoliths in the Western Desert. These images, The Erratics (exposure), became the reference point for the making of sculptures in his studio. “I gradually began carving planes and shapes into chalk collected from the rockfalls along England’s South Coast, shaping the chalk towards the two dimensional, towards the photographic print, working with and against its natural forms.” This research produced the photographic cycle The Erratics (wrest), where the word “wrest” actually indicates the action of taking away, whether a thing from a place or a concept from a context. “Within this gesture – and in the interaction and overlap between appearances and processes that make up the works in The Erratics – I see a tendency towards both abstraction and empathy, depending”, states the artist.

Tuesday-Saturday 4-8pm and by appointment