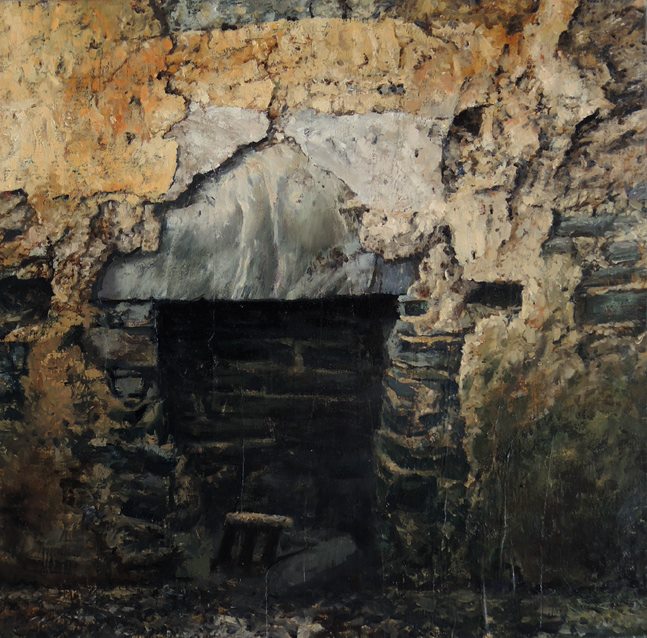 The Olivier Cornet Gallery is delighted to present ‘Diaspora’, an exhibition of paintings by gallery artist Eoin Mac Lochlainn.

‘This new body of work is a reflection on Irish emigration in the 21st century. It is a series of paintings of abandoned fireplaces in derelict houses on the West coast of Ireland. It was inspired by a poem by Cathal Ó Searcaigh entitled: "Na Bailte Bánaithe", a poem about how spirits haunt the land, long after the people who lived there have gone. I spent some time in the Donegal Gaeltacht during the last few years, searching for and exploring the old homesteads that were mentioned in the poem.

I was reminded of how central the fireplace was to the home, how people used to keep the fire going throughout the night and throughout the year, and how it really was the ‘hearth’ of the home. If people were moving home, they would take a lighting sod of turf with them from the old house to begin the fire in the new house, so as not to break the cycle. Seeing these abandoned fireplaces, each with its own distinctive personality, was quite distressing and I undertook the series of paintings as a sort of requiem for those who had gone, a commemoration of the diaspora.

But where had they gone or what had become of them? Had they perished or had they built a better life for themselves somewhere else? Whatever the case, this country is so much the poorer for their loss. The second series of paintings is of empty skies, symbolising for me the possibilities and promise of a new life.’ – Eoin Mac Lochlainn

‘Diaspora’ opens on Sunday 13th September at 3 p.m. at the Olivier Cornet Gallery, 3 Great Denmark Street, Dublin 1 and will run until 11th October.

The exhibition will be officially opened by Dr Margarita Cappock, the Deputy Director and Head of Collections at Dublin City Gallery The Hugh Lane.