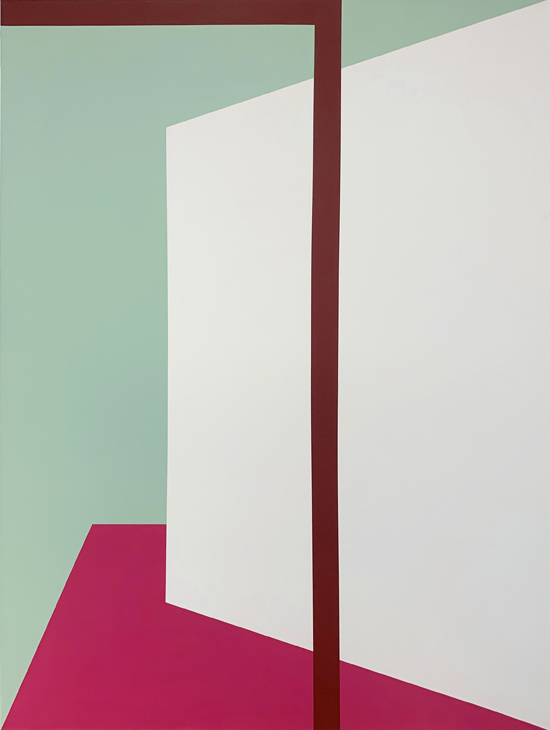 Dominik Stauch works constantly at an „expansion“ of painting as he combines different materials (painting in oil, digital prints, computer animation, sculptures and installations) but at the same time he remains faithful to the color theory and also he remains an artist.

His goal is the consistent interaction of colors and forms. The reduction of basic geometric forms let him enough flexibility, to harmonize his conceptually attempt with the newest technique. Art history, music theory of the 20th Century and the Beat-literature give him the necessary foundation to create his work with the familiar depth.

Dominik Stauch has resorted to the most recent work on the brush, bringing his video works onto canvas. His often applied, consistent reduction to simple, geometric basic forms comes to the train. The concrete painting offers the artist a larger color palette and so it is all the more important to him that each color is used only once. The new acrylic color paintings contain references to older works, such as: the “holes” found in earlier collages can be rediscovered in some of the paintings. The latest work by Dominik Stauch is not a moving painting, where the perspectival view of space builds up and in the next moment returns to two dimensionality. However, perspective spaces are created in the canvases and the forms begin to vibrate on closer inspection in the eye.

The paintings are complemented by two installations that reflect the shapes of the paintings in the room. In addition, Dominik Stauch has made a new series of collages, which give the exhibition the title ‹Painkillers›; Angels and superheroes are partly covered or obscured by geometric figures.

Together with the latest works we present the just published artist book “Dig a Pony” by Dominik Stauch. In the book, many things are blurry and then presented again in a crystal clear manner.

“Dig a Pony” by Dominik Stauch promises everything and nothing. It is not an ordinary artist’s workbook or a succession of retrospective works. Most of it remains open and has no claim to clear definitions, it is much more of a veritable hymn to planlessness. “Dig a Pony” celebrates the ignorance and detachment of power-installed processes that destroy everything unplanned. Intuitive is not plannable, art in the broader sense is not. Thus, even unplanned things do not always have value and utility, “dig a pony” is efficiency versus nihilism.