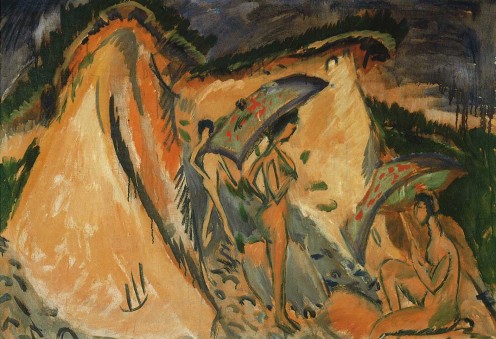 “I, too, am forced to be a bit frugal now, and materials have become quite pricey. But thank god, the canvas has 2 sides.” (Ernst Ludwig Kirchner in a letter dated 7 February 1919)

Ernst Ludwig Kirchner (1880–1938) is one of the leading exponents of German expressionism. Through his avant-garde approach to life and his liberated treatment of form and colour he revolutionized early twentieth-century painting. The oeuvre of the artist, who during his lifetime redacted his own work through self-authored art reviews and stylistic revisions, includes a special group of works: reverse-side paintings as a distinct category of works. In cooperation with the Kunsthalle Mannheim and the Ernst Ludwig Kirchner Archiv in Wichtrach/Bern, the Kirchner Museum Davos for the first time devotes an exhibition specifically to the reverse-side or double paintings.

Usually, painting contents itself with one image side. Still, the phenomenon of canvases painted on both sides is by no means confined to the work of Ernst Ludwig Kirchner. His fellow artists Erich Heckel, Otto Mueller, and Max Pechstein likewise created reverse-side paintings, though none on the same scale as Kirchner. Currently, 138 such paintings are recorded in the Kirchner archive. The history of these works is as varied as their status and quality. Some of the reverse-side paintings are finished works signed by the artist, whose quality is in no way inferior to that of the painting on the front. What complicates things is that in Davos Kirchner used paintings from his time in Dresden and Berlin, turned them around, reworked them, and adapted them to his new style. Even though Kirchner himself contributed to the confusion of his oeuvre in this way, we can still clearly distinguish fronts and backs during Kirchner’s lifetime as well as the turning manoeuvres that happened after his death.

Based on seventeen two-sided paintings created during the period from 1909 until 1937 the exhibition takes a look at the exciting field of artwork and artist research. In doing so, it also examines the varying views of the “double Kirchner” that prevail in the art world, so as to initiate scholarly and curatorial reflection on the two sides of the canvas.

The focused exhibition presents all paintings in such a way that both sides can be seen. In this way the artworks, which Kirchner in the context of his studio invariably intended and painted as panel paintings for the wall, become objects in space that reveal themselves only as the viewer moves around them. Rather than evaluating the problem of primary and reverse side in the exhibition space, this presentation format is simply intended to allow the public to see and judge for themselves. The framing variations thus exposed provide some indication as to what was when, by whom, and for what reason defined as “reverse side.” Moreover, they provide information about the history of the paintings as manifested in inscriptions and labels.

Double paintings where the dimensions of the obverse and reverse do not coincide pose a particular challenge. In such cases it is impossible to show both sides at the same time without any evaluation. After the first half of the exhibition we will therefore turn around some of the works, thus creating a new, different show. The comprehensive exhibition also includes an interactive presentation of all 138 known double paintings by Ernst Ludwig Kirchner.