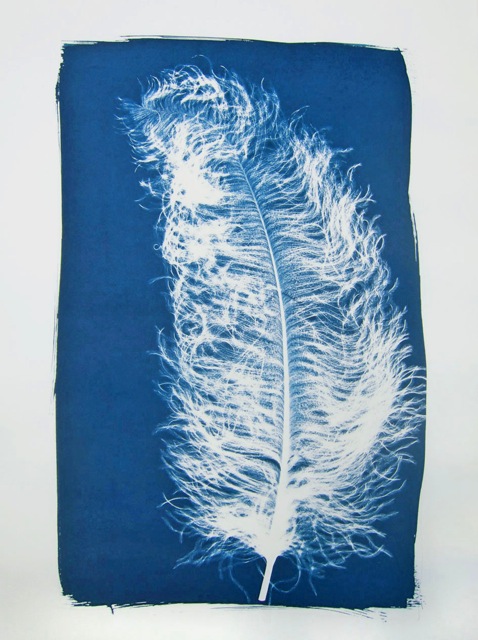 43 Inverness Street, together with Silver Jungle, is pleased to announce the first solo exhibition of cyanotypes by photographer Elisabeth Scheder-Bieschin.

In 2013, missing both her dark room and her mother who had died that year, Scheder-Bieschin turned to making cyanoprints, one of the earliest forms of photography. No camera is needed and instead sunlight and light-sensitive chemicals are used to record an image onto paper. In her first experiments with the process, she used the sun to create photograms of her mothers possessions and from that she developed a series of prints. The prints on display are a hybrid of both early and modern photographic techniques.

The simplicity of the images and the subject matter – a feather, a butterfly wing, the windborne seeds of a dandelion – gives no indication of the evolving experimentation or the significance that an image might have for the artist. Traces of nostalgia and the clutter of decision-making, judgement, rejection and manipulation are left behind. So, too, are the myriad observations of daily life and the historic influences stretching back to Sir John Herschel who first discovered the cyanotype process in 1842. Sheder-Bieschin has distilled all of these, if not shed them entirely, in order to allow the object itself to communicate its own serenity.

Published in small editions, each one is hand-printed by the artist.