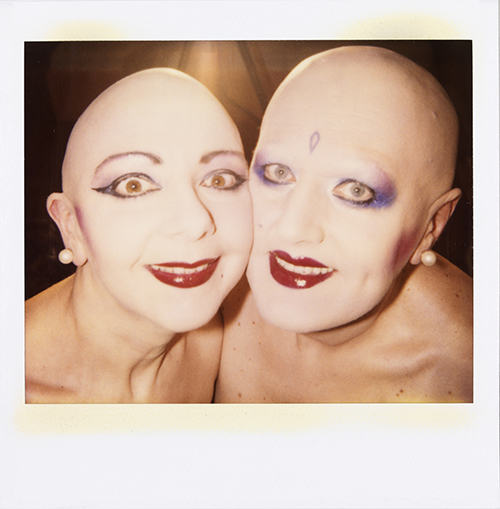 EVA & ADELE – L’AMOUR DU RISQUE presents the artist-couple’s work of the last 25 years in an installative retrospective. The exhibition explores the concepts underlying the pair’s art and their imagery. To this end, for the first time in me Collectors Room from 27.04–27.08.2018 in Berlin, a comprehensive selection from their most important groups of works across media including drawing, painting, photography, video, and sculpture, as well as their self-made costumes and costume designs, will go on show. Together, these illustrate the finely nuanced and radically transgressive artistic existence of EVA & ADELE. Part of the concept are also some objects they have crafted for the exhibition, such as a perfume from Grasse, France, a signed wristwatch by Swatch and handbags by PB 0110, a label by Philipp Bree.

In order to question perspectives, concepts, and relationships that are often taken for granted, EVA & ADELE have been living together since 1991, creating a common conceptual artwork: when they appear in the international art world, it is always together, dressed the same, always smiling. The artists, according to their own self-definition, come from the future, because with their permanent ‘futuring’ performance, they live a radical shared existence in order to embody their vision for a new definition of gender roles. Their idea of FUTURING, therefore, abolishes played-out gender roles, both male and female. In the spirit of their conceptual claim ‘Over the Boundaries of Gender’, EVA & ADELE exist simultaneously ‘in art and in nature’. This attitude is illustrated for example by their large three-channel video installation Watermusic (1997/2003).

The title of the exhibition L’AMOUR DU RISQUE emphasizes not only the couple’s love for each other and the risk they collectively share, to this day, by radically exposing themselves to external and internal dangers with their chosen way of life, but also how they go about their collective existence. Their concept of FUTURING shows both their courage and their audacity in transmitting, with energy and daring, their ideas to wherever they appear in the world.

A major section of the exhibition, therefore, focuses on their international work: the glamorous WINGS Costumes (1992, 1995, 1997) and the video works that are based on them, WINGS I, II, III (1997, 1998), are staged as an installation. For the very first time, all of the associated array of costume designs is exhibited, consisting 162 sheets. Within this collection EVA & ADELE have for decades meticulously envisaged and recorded each outfit, with its matching pair of stockings and shoes, handbags, umbrellas, etc.

EVA & ADELE exist in a state of permanence. Within it, they live their performance 24 hours a day, seven days a week, without beginning or end, day in and day out. For example, their video work Kisses in the Supermarket, dated 1997, humorously explores the idea that even while buying groceries in a New York City supermarket they are living their daily lives as a performance, continually proclaiming: ‘Wherever we are is museum’.

Also exhibited are biographical sculptures, including a bed and bodice from their personal effects, as well as pieces from the group of works titled Transformer-Performer. These works are composed of EVA & ADELE’s logo: a heart made up of the two artists’ heads leaning against one another. The logos are painted on surfaces made up of collages of works on paper from which the signatures have been removed with a scalpel. These reflect not only the shadows, ghosts, and abysses in which the two exist; they also show the tender interplay between them. The video work Eurotrash (1998) is also an important piece that shows how EVA & ADELE are understood internationally. The work combines scenes from the British cult series of the same name in which they appeared on a number of occasions from 1998–2001.

The entire exhibition space and the Wunderkammer in me Collectors Room Berlin are incorporated into EVA & ADELE’s Gesamtkunstwerk and provide a comprehensive look at their decades of life and creativity in the art world.