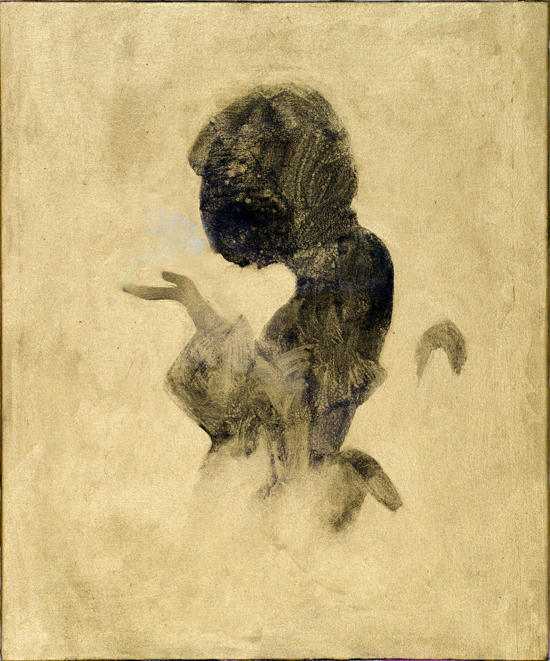 Since my residency in Varanasi/India in January 2020, I have also been painting in gold. The pictures carry the sheen of gold with lightness – and counteract its weight and symbolic power.

Planned & unplanned: sometimes they are fought almost infinitely slowly, like a nag, sometimes they are a throw in the moment, in a frenzy: Various techniques (dangling in gouache as well as achievements in acrylic and oil and wiped fine pencil marks) fertilize each other. Underneath everything lies the same reason. The easy is favoured by luck, the difficult had to pay a lot. They are inseparable, the extremes, are step boards and spring boards, are interwoven.

The process of painting is not going as planned. The result was not aimed for as it was achieved. It is a small and large permanent trial and error; what moves and inspires me. Exploring the unknown. “Coincidence” is actually a premature term for a precious procedure that I would rather call “Per aspera ad astra” – through difficulties to the stars. I have dedicated myself to this path, I walk it incessantly, I leave the beaten path and make my way through the undergrowth – as I sometimes want to call life, sometimes not. There is a lot to do to get the picture to me. Because sometimes the undergrowth is a veritable jungle, wild animals and other great dangers lurk there …

And where are the stars? I reach them by breathing in the undergrowth and occasionally catching a glimpse of them. To find my own place in the stars, where the air is thin and the distances are maximal, that is not my real concern. Rather, the view of it as a way out of the undergrowth is my promise. The bright blue sky by day, the dark, speckled infinity by night: they become visible for a moment. The next morning the whole great feeling from the day before is gone, the stars fade. It starts all over again. Or almost entirely.

I move beyond the clear recognisability and this side of the vague and arbitrary. It is the terrain of an abstraction, which, however, remains stuck to what is still tangible: the object, the figure, the landscape. It is not the pure form that I care, it is the form as a vessel. Art is the vessel that is presented not only in its form, but also in its function – as a jug, as a glass, as a bowl. It does not contain itself, it holds the drink and is sometimes full, sometimes not.

P.S. For some pictures I have recorded the work process in the stages of creation – errors, confusions, variants – and documented it in an album. It’s part of the exhibition.