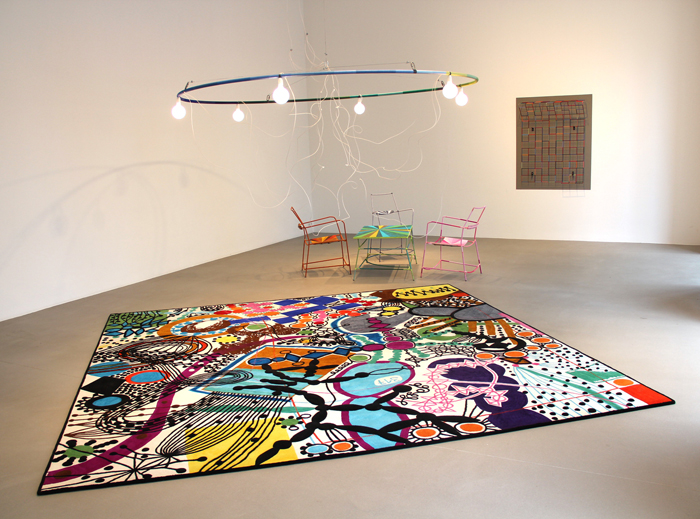 In the 1960's the multidisciplinary minimalist Donald Judd clarified in pragmatic terms the concept of interdisciplinary dialogues between art, architecture and design: If I make a sculpture, I am a sculptor; if I make a chair, a designer; if I make a house, an architect. However, his escape from the labyrinth of complex questions remains closed for many conceptual artists of the subsequent generation. Like Gilbert Bretterbauer, however, they operate explicitly in the space in between; even more, this in-between is their true artistic terrain.
In the last twenty years a remarkable Viennese scene has developed on this terrain around Franz West. West and the generation of Gilbert Bretterbauer, Peter Kogler, Gerwald Rockenschaub, Heimo Zobernig and others have not only intensely dealt with the shift in terminology between painting, sculpture, object and space, but also with the relationship between sculpture and functional object, as well as fine and applied arts. In addition to hybrid art objects, they designed – alone or in reciprocal cooperations – furniture, lamps and other objects of daily use. They arranged reading and quiet zones, bars, cafés and restaurants in the communicative in-between zones of cultural events, cooperated with architects and were in this way simultaneously initiators and participants of a trend.Their “art with practical value” as well as their specific analysis of the precarious relations between art and design brought diversity into the dull variety of high-end design.
Gilbert Bretterbauer represents the group in his generation that still adheres to the handmade, or at least that does not want to forgo this type of individual expression. Of course, he is also well acquainted with the computer and as a trained textile engineer, he knows all of the intricacies of textile production, which allows for, when necessary, the adequate implementation of his hand-painted and hand-drawn designs. In “Salon”, his reaction to the theme of “Grenzdialoge” (“Interdisciplinary Dialogues”), he confronts an industrial product with sculptural, hand-made furniture hybrids. The artist's interest in the psychedelic, in hippie culture as well as the Californian version of American daily culture, is visually consolidated here in an interior of ambivalent aesthetic and unique character.
Edelbert Köb