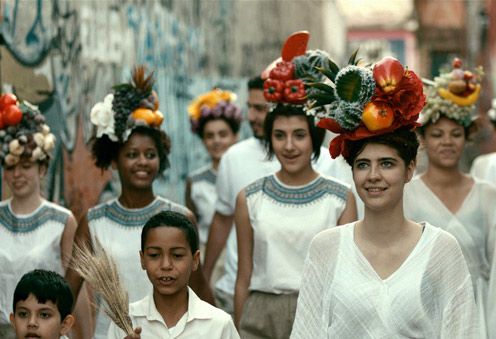 THE NEW HUMAN is a video-based exhibition project that artistically explores our current condition as humans, while also presenting imagined scenarios of our future. The project’s first chapter, titled You and I in Global Wonderland, will take over the entire upper level of Moderna Museet Malmö starting on March 14. It addresses pressing issues of our time relating to migration, alienation, and political and religious extremism, including the rise of nationalist and neo-fascist movements in Sweden and Europe.

Art has the ability to shed new light on reality as we confront it on the street and on the screen, and to raise questions about the norms and values of our time. The chapter You and I in Global Wonderland explores some of our hopes and dreams, but also feelings of fear and frustration about how we should and could live together in a changing world. Eleven internationally active and acclaimed artists are contributing to the exhibition: Yael Bartana, Robert Boyd, Loulou Cherinet, Ioana Cojocariu, Cao Fei, Esra Ersen, Isaac Julien, Santiago Mostyn, Adrian Paci, Tomáš Rafa, and Ferhat Özgür.

We get to share experiences of gigantic transformation and human migration brought on by war, climate change, and economic globalization. There are works exploring the widespread extremism of our time, and others that remind us of the colonial past and how it continues to affect the way we live together as humans today. As an exhibition, You and I in Global Wonderland may convey a longing for something lost—perhaps an earlier life ruined by war—but it will also present us with feelings of tenderness, disorientation, and comedy arising from the confrontation between different cultures, languages, and lifestyles.

All works presented in THE NEW HUMAN have been produced since the year 2000, the turn of the millennium, and span from seminal contemporary classics to very recent productions. At Moderna Museet Malmö, THE NEW HUMAN will be presented in two extensive chapters, each with a different focus and subtitle: You and I in Global Wonderland in 2015 and Knock, Knock, Is Anyone Home? in 2016. A third chapter will thereafter be presented at Moderna Museet in Stockholm in the fall of 2016.

THE NEW HUMAN is the result of a substantial collaboration between Julia Stoschek Collection in Düsseldorf and Moderna Museet Malmö, and it includes work from both these collections as well as loans from individual artists.