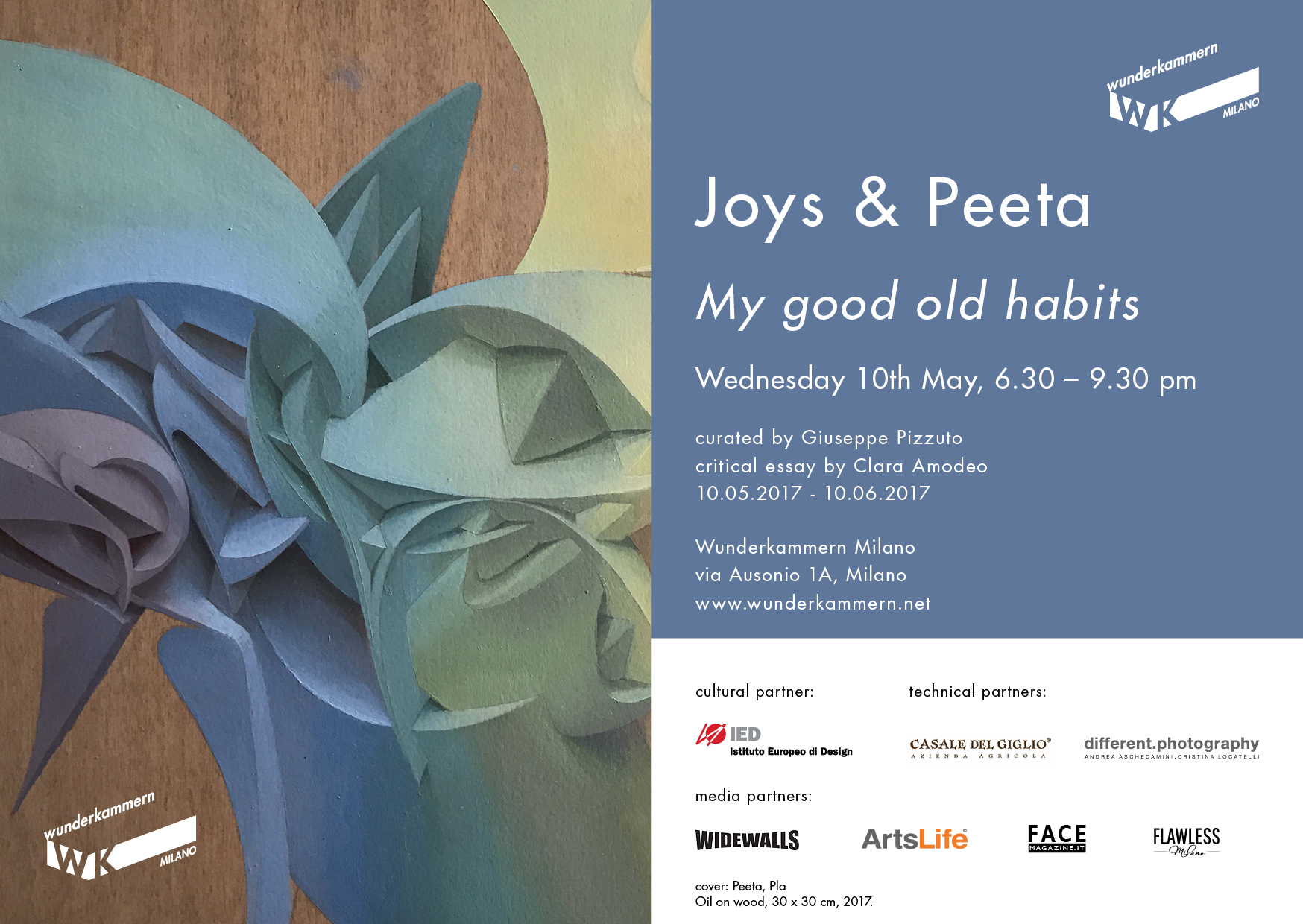 location:   Via Ausonio 1A, Milan

Wunderkammern is glad to present the exhibition My good old habits by Italian artists Joys and Peeta in its Milan venue.

Joys (Padua, 1974) started his career as a writer in the ‘90s, focusing his research on lettering. Over time the letters have gone through a change which has transformed them in veritable visual structures, with an almost architectural coherence. The geometrical joints of the lines together with the strong but harmonious chromatic variations bestow an effect of depth to Joys’s artworks. The result is an abstract composition which engages the observer and generates multiple perceptions. The artist has participated to the project La Tour 13 in Paris (2013) and to exhibitions in important institutions such as La Triennale in Milan (2010), PAC Contemporary Art Pavilion in Milan (2007) and Bevilacqua La Masa Foundation in Venice (2007).

Peeta (1980) lives and works in Venice. Studying sculpture and industrial design, the artist has elaborated a tridimensional painting in which the lettering acquires volume. The rhythmical juxtaposition between soft curves and sharp lines results in an extremely fluid and dynamic abstract figuration, a reflection of the artist’s personality and feelings. To Peeta painting and sculpture depend on each other, because they both contribute in a complementary way to the research on forms, colours and light. The artist has participated to many exhibitions, fairs and festivals all around the world; his work has been shown at the Palazzo Ducale in Genoa in 2015 and in 2013 Peeta has performed at B2B TO BIENNALE, a collateral event of the 55th Art Biennale in Venice.

The exhibition My good old habits is centred on the vices and customs which, becoming daily routine, we repeat in an automatic, predictable way, until they turn into tradition. In the course of our life we find convenient to stick to our habits and therefore we tend not to question them, even when evidence proves their limits. We become lazy when it comes to question ourselves, and we fear that other people’s traditions could destabilize our system of beliefs. Consequentially, our condition does not improve, and everything appearing new and different to us is pushed away and rarely adopted. However, we can reach an improvement in our own habits also from a reflection on other people’s ways of doing.

In particular, the artists build their modus operandi in time, thus strengthening a series of personal practices. The exhibition My good old habits aims to establish a dialogue in which Joys and Peeta confront their respective artistic and aesthetic research, metaphor of their habits and traditions. The two artists prove that, despite the differences, and mostly thanks to them, it is possible to get to a perfect synthesis and union of their artistic styles. The show will present artworks on back side painted glass by Joys and mixed media artworks on canvas by Peeta, together with some four-handed canvases.