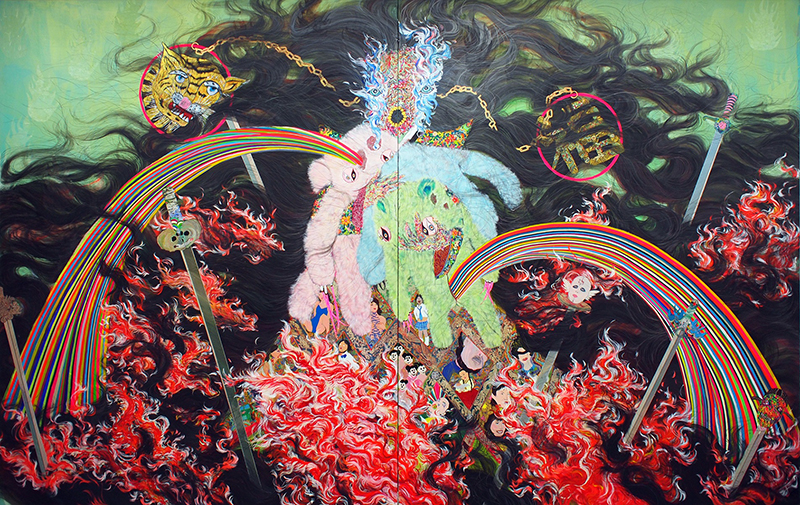 Parasol unit foundation for contemporary art is delighted to present for the first time in Europe a solo exhibition by the Korean artist Hyon Gyon.

Known for her intricate and highly expressive works, often like mid-burst manifestations of explosive raw energy, Hyon Gyon combines traditional Korean textiles, Japanese paper and paint together with various less conventional materials to create her paintings and sculptural installations. She explores themes of sociocultural identity, grief, anger and sexual politics. Her assemblages are powerful fusions of vivid colour and emotion that appear to collide yet somehow live in unity within each work.

Inspired by Korean shamanism, and her own feelings, Hyon Gyon’s experience of its rituals allows her to tap into the depths of her own subconscious, to purge her feelings of sorrow and rage by transforming them into creative energy in the hope of freeing herself of suppressed anguish. Through this cathartic process, whereby the artist energetically acts out the awful hallucinations and terror-stricken visions that haunt her psyche, she transcends these agonising emotions and translates them into her art works. Hyon Gyon believes that art has the power to ignite negative emotions from within and transform them, similar in its effect to a cleansing that restores contentment and a sense of well-being.

Using both traditional and innovative techniques, Hyon Gyon makes the surfaces of her works sizzle and scream with vigorous gestures to which no viewer can be indifferent. One of her recurring techniques is first to attach traditional Korean satin fabric to a canvas or panel, then melt the cloth with a soldering iron. This liquefying effect creates works that can appear cruel, haunting, seductive and chaotic, all at once in paradoxical harmony.

Commanding immediate attention on the ground floor of Parasol unit is We Were Ugly, 2017, a long and thickly executed mixed-media artwork that covers almost the entire length of the gallery wall, together with a selection of smaller paintings and assemblage sculptures. First shown at Kyoto Art Centre, Japan, for the Culture City of East Asia 2017 exhibition, We Were Ugly consists of 17 panels and is 20.4 metres long, making it the artist’s largest work to date. A sea of horrified eyes and monstrous screaming skulls are seen fleeing in terror from the torturous flames of an atomic bomb in this powerfully immersive work, which references the tumultuous history of political conflicts and wars throughout Korea, China and Japan. Hyon Gyon uses the past tense in her title to imply hope for the future amid the political unrest in this part of the world.

In the first-floor gallery, Hyon Gyon presents recent paintings and sculptures which she has made specifically for this solo exhibition at Parasol unit. A number of these works were made using sgraffito, a technique of scratching through a top surface of lime mortar to reveal lower layers of contrasting painted colours. Such works are created by subtraction rather than addition.

Curated by Ziba Ardalan, Founder/Director of Parasol unit, the Hyon Gyon exhibition is accompanied by a comprehensive publication and a tailored programme of related educational events.

Hyon Gyon (1979–) was born in Dangiing, Korea. She achieved a BA in Western Painting from Mokwon University in South Korea, and in 2006 moved to Japan to pursue an MA and a PhD in Painting at Kyoto City University of Arts. Her career began during her time as a student in Japan and developed further when she moved to New York in 2013. She has received several fellowships and awards, including the Asao Kato International Scholarship, 2006–2008, the Kyoto Cultural Award, 2014, and the Tokyo Wonder Wall Competition Prize in 2014.

Hyon Gyon has work held in, among others, the permanent collections of: Brooklyn Museum, NY, and the High Museum of Art, Atlanta, in the USA; Kyoto City University of Arts, Kyoto Municipal Museum of Art, Kyoto Bank, and the Takahashi Collection in Japan.