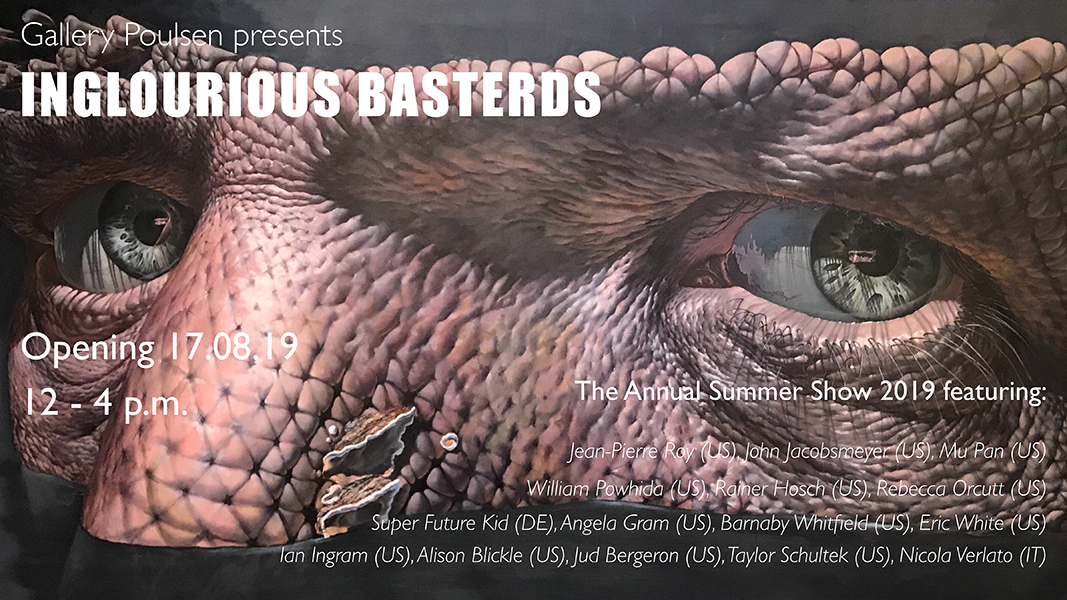 Saturday 17th of August we invite you for the opening of our annual summer show Inglourious Basterds.

Just as Tarantino set his famous team of Inglourious Basterds, Gallery Poulsen has put together a nothing less than magnificent team of invincible artists who are brutally superior in their creation of works that we proudly present in our 10th edition of New Art from New York  – and Other Places.

Tarantino’s Inglourious Basterds tortured their enemy, as the quote above states, just with the thought of their existence. In the universe that we present at our summer show you experience a parallel reality which is so captivation and spectacular that just the thought of is likely to torture those outside the gallery’s four walls. The outsiders will be insecure and for a good reason!

The summer show at Gallery Poulsen is always an absolute highlight because we present the gallery’s vibrant DNA. This is where you get a special sneak peek into the heart of the gallery and a get a sense of what direction we are moving in over the next 12 months.

Entering is like being in an uplifting sort of cloud-cuckoo land where fiction becomes reality. The works demand something from their viewers, they arouse curiosity and at times unrest – the interpretations challenge our self-perception and inspire us because they are beyond the familiar and safe. Like raging rebels, the artists blast the medium and push our perception of reality!

There is a reason why we do as we do. “That is a bingo”

as Christoph Waltz aka Landa in Inglourious Basterds would say.