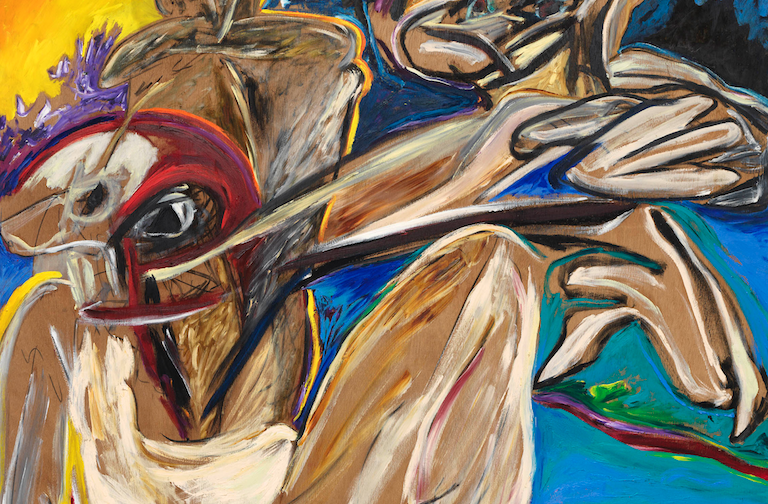 Pippy Houldsworth Gallery presents Resilience(s), Jacqueline de Jong’s first solo exhibition in the UK. The exhibition will focus on paintings made in the 1980s and early 1990s, bringing together key works from her Upstairs Downstairs and Paysages Dramatiques series. Exuberant, sensual, violent and contradictory, Resilience(s) manifests the defiance and adaptability inherent in de Jong’s practice.

Towards the middle of the 1980s de Jong began to return to a more expressionist style of painting, her work having become increasingly figurative in the 1970s. Here the grotesque figures from her 1960s paintings make a reappearance with a more overtly animal form. The Upstairs Downstairs

series, originally commissioned for the Amsterdam Town Hall, places its protagonists in the liminal space of the stairwell, ascending and descending, seemingly without purpose. In contrast, the paintings of the Paysages Dramatiques series draws upon a trip de Jong made to the Dutch island of Schiermonnikoog depicting its characters against an apocalyptic landscape of twisted trees and swirling waters. Certain of the Paysages Dramatiques dispense with figures, leaving the same unbridled emotions to be expressed through the colour and form of the landscape alone.