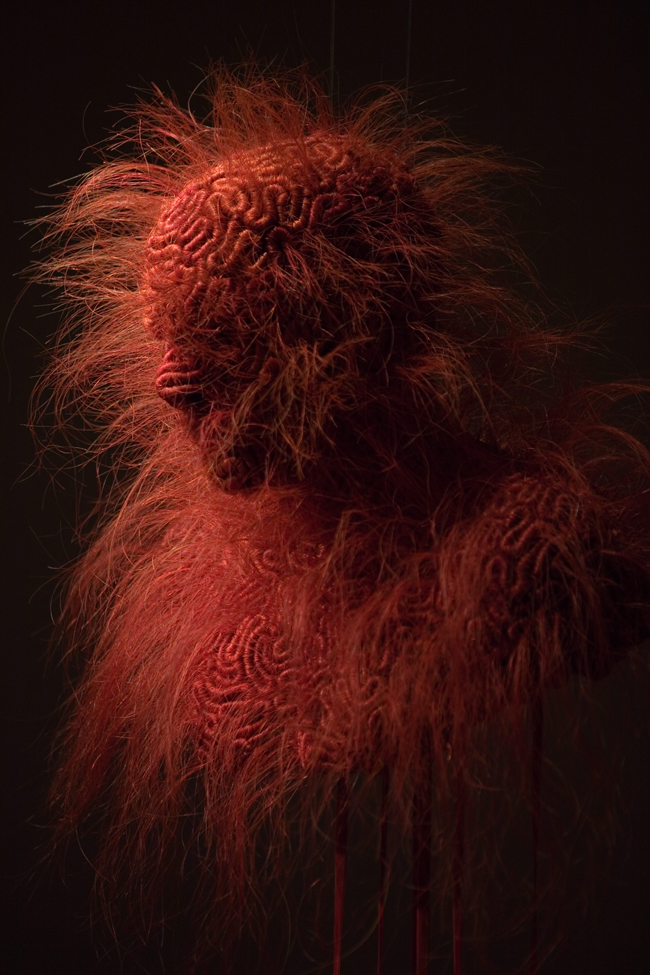 Javier PÉREZ – Vida / Life
or the fragility of being

The mother surrounds the corps of her dead son in a tender embrace. With hollow eyes she bends over the lifeless body, protectively covering it with her bony fingers and her ghostly clothes. However, the mother is not the giver of life, but the incarnation of death. In his new work Madre Javier Pérez distorts the Christian iconography of the Domina nostra de pietate – the presentation of the Mother of sorrows.
The Pietà as well as other new works by Javier Pérez will be on display at Mario Mauroner Contemporary Art Vienna from May 19th, 2016.

If one would have to describe the artist Javier Pérez and his oeuvre with a single word, the most evident term would be „fragility“. „I am interested in the fragility of being“, Javier Pérez says and adds: „to emphasize the fragility of the line between supposed contrasts“. The superficial contradictions of stability and fragility, inside and outside, attraction and rejection, life and death, transparency and opacity challenge Javier Pérez’ artistic journey along the boundaries – embedding the poetry of ambivalence into the endless flow of time.

„Time is the substance from which I am made. Time is a river which carries me along, but I am the river“, wrote Jorge Luis Borges. – Javier Pérez gives himself to this evanescent flow.
„I have a cyclical view of time, in which life and death are only two stages within the circulation of transformation. With the work Madre I wanted to explicitly formulate the ambivalence of life and death.“ In the presentation of pain and death also resonates an erotic component. „Spirituality and sensuality which seem to be contrary, have a close link in the entire history of art“, says Pérez.
The death is as callous as the desire … Amor et Passio, Eros and Thanatos have always been the dialectic pair of opposites and are also recurrent in Pérez’ oeuvre.

The process of transformation that submits all life is especially apparent in the series Fuentes de vida. The source of life pours convulsively out of the heart and escapes into widely branched veins. As already depicted in the cycle Reticula naturae Pérez also demonstrates here the maturity of all organic material and the brittleness of life.

„I am interested in the networks and the ambiguity shown by certain forms. There is a familiarity between the animal and the natural – both are determined by the same relentless law: they are only existing in a stadium of endless transformation.“

Javier Pérez, born 1968 in Bilbao, is one of the most important Spanish contemporary artists. His work is permeated by symbolic power and characterized by intense metaphoric expression. In 2001, Javier Pérez represented Spain at the Venice Biannial and exhibited in 2008 at the Guggenheim Museum in Bilbao (where his work Màscara de seducciòn was purchased for the museum collection).
Moreover, his works were presented in important museums and galleries worldwide such as the Centre Pompidou, Paris; Palais de Tokyo, Paris; Palacio de Cristal, Museo Nacional Centro de Arte Reina Sofía, Madrid; Chapelle du Centre de La Vieille Charité, Marseille; Kunsthalle Wien; Musée d’Art Moderne de la Ville de Paris; Musée d’Art Moderne et Contemporain de Strasbourg etc.
In 2011 he was part of the renowned „Glasstress“ exhibition at the Venice Biennial and created in 2012 the monumental installation Das Karussell der Zeit for the Salzburg Music Festival, when he took up the invitation to create an artistic dialogue with Bernd Alois Zimmermanns’s opera Die Soldaten. This large scale mobile was a very delicate construction in which imaginary couples united for a never ending dance of solitude.
Most recently, Mario Mauroner Contemporary Art Salzburg exhibited in 2014 Pérez’ tender, gold shimmering works of the cycle Reticula naturae.